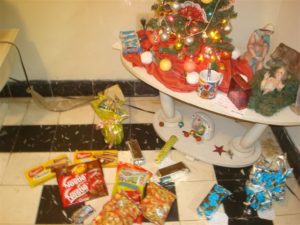 Somos+, Javier Cabrera, 24 December 2016 — I was an atypical Cuban child because I always had Christmas. My mother, whom they tried to expel from her teaching job once because Christians didn’t have the morals to teach classes to the “New Man,” said that she wasn’t going to let a man tell her whether or not to celebrate Christmas or the Three Kings in her own home.

In those Decembers, she took out the little tree from her childhood, with what we called “the balls from before ’59,” and bought gifts with whatever she could. I remember perfectly that the gifts were increasingly fewer, and in the ’90s moved from the floor to the little table. Of course, the celebration was never interrupted, not even in 1994, a year to forget.

For me, the year started to come to an end when Christmas showed up in our house. And I suffered many conflicts in kindergarten and elementary school, because I couldn’t understand that I lived in a country that was so equal, and so different.

Today I look back and understand that the best Christmas gift I got was this: “No one has the right to tell you to celebrate or not to celebrate. Your freedom ends when you let one group of the ‘enlightened’ impose their celebrations, wakes, or whatever they want.”

Earlier this year, I landed a few hours apart in the same airport where the Chapecoense team’s plane crashed. I was going to work, and I was warned that there was a huge local party. I heard some fireworks set off in celebration, but not even 3% of what was normal. In general, without imposition, or fines, or prohibitions, I saw a people in pain come together to fill stadiums.

An image in complete contrast to the imposed mourning that same week in Cuba, mourning that they are now trying to extend indefinitely, annulling our freedom to celebrate, or choosing not to participate without facing the loss of one’s job, which in any event only pays a pauper’s wages.

Christmas is many things, but above all it is home, family and celebration. Today it is no longer completely banned, and even so it is scandalous that no one has asked an entire people for forgiveness for forcing them to cancel it.

Today, Christmas day, I remember my mother a lot and thank her for not allowing them to tell her what to do. I also remember friends who didn’t dare, and who didn’t even hear about Christmas until they were older.

Today is a good day to tell the mother of all of us, Cuba, that we celebrate and we celebrate with her. That she gives us once again the ability not to listen to those who would bother a united family that celebrates. To them, as a nation, she also gives the freedom to celebrate their frustrations where no one interferes with them.