Hablemos Press, Eduardo Herrera Duran, Havana, 17 August 2015 – In recent days, a bus carrying some functionary or another and several police officers travels around some of the most central locations in Havana with the objective of rounding up all loiterers and beggars.

The districts of Vedado Capitalina, Centro Habana and Habana Vieja have been combed-through in those areas most frequented by these people. Once again, this part of the city seems a place where no social problem exists.

As customary, when an important international event is imminent, or some world celebrity is coming to visit, all the people who give the impression of being panhandlers are collected. These citizens are taken to the Havana Psychiatric Hospital, temporarily, until the event is over.

Anyone who presents an image contrary to that which is broadcast on the official media, with respect to Cuban society, is practically cleared away. This way, visitors and journalists who are following the event will not have contact with the reality that we Cubans are living—thus having an impression of wellbeing and supposed development insofar as social matters are concerned.

Many countries, above all the poorest ones, have this type of citizen; but what is notable in Cuba is that these poor souls could be an ex-elite athlete, a retired doctor or teacher, or some other person who worked all his life and the pension he receives often does not exceed 10 dollars per month.

Not only is it in the capital that such herding occurs, but also in Santiago de Cuba and Villa Clara.

The arrival of John Kerry—and the imminent visit of the Pope—have provoked the appearance of many journalists from diverse media outlets, who could potentially shed light on these matters. 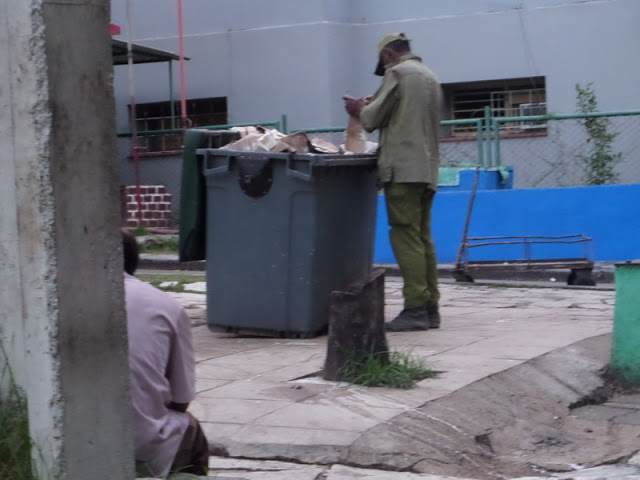 Translator’s Note:
* The official name of these stores is “Hard Currency Collection Stores” – meaning that their purpose is to collect, via the sale of highly overpriced goods, the cash from the remittances sent to Cubans from their family and friends abroad.