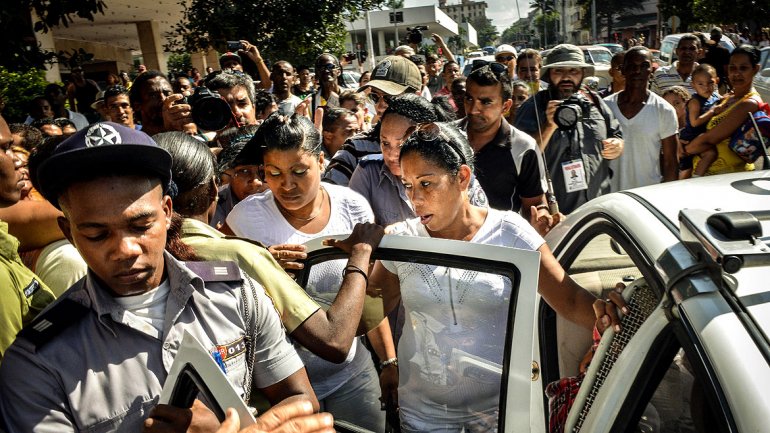 HAVANA, Dec. 11, 2013 , Let’s Talk Press / www.cubanet.org.- Repressive forces of Raul Castro’s military regime arrested several correspondents from the Hablemos (We Speak) Press Information Center  who were trying to take pictures of the repression against activists and opponents gathered on Tuesday, 10 December to conduct activities for the International Day of Human Rights.

The arrests, which lasted between five and seven hours, were carried out by officials of the Department of State Security (DSE ), the political police, the Directorate General of the National Revolutionary Police (PNR ) and the General Directorate of Counter Intelligence, all from the Ministry of the Interior.

Rodriguez, Cacer and Gonzalez were arrested near Coppelia Ice Cream, located on 23rd Street and L in El Vedado. At this site, Berta Soler, spokeswoman for the Ladies in White Movement, had called for her group to stage “a demonstration to the world that the military regime of President General Raúl Castro does not respect human rights.”

Otero and Guerra were arrested at noon Tuesday in Infanta Street at the corner of Santa Marta, Central Havana, coming out of the headquarters of Hablemos Press, which remained besieged by agents of the political police from the early hours of the morning.

The correspondent reported that Jorge Alberto Liriano was arrested in the town Santiago de las Vegas, Rancho Boyeros municipality, Havana, on traveling to the center of the capital, and he affirmed that he was beaten by the security agent known as Gaston.

The correspondents detainees were transferred to the 4th Unit of the National Police in the Cerro municipality in Havana, and others to the Detention Center known as Vivac, also in the capital. State Security Agents and the People’s Revolutionary Police (PNR) violently prevented correspondents Raúl Ramírez Puig and Odalys Pérez Valdes from Guines, Mayabeque Province, from leaving their homes to travel to Havana, Puig reported in a phone conversation.

Meanwhile correspondents in Sancti Spiritu, Guantánamo and Holguín reported harassment and repression suffered this day when the world celebrated the International Day of Human Rights.

A correspondent at Estado de Sats

Pablo Morales, Hablemos Press correspondent in Havana, said Tuesday night that by managed to enter the house that is the site of the Estado de Sats Project, located at No. 4606 1st Avenue between Calles 46 and 60, in Miramar  Playa Municipality where activists and organizers performed different activities for the 65th Anniversary of the Universal Declaration of Human Rights, as they were repudiated from outside the housing by about 400 supporters of the Castro regime.

Morales said that, on Tuesday morning, “a dozen activists were violently arrested by the political police while trying to enter Estado de Sats,” which remained under siege by police officers, State Security and Rapid Response Brigades (BRR).

We still do not have an exact figure of how many people were detained Tuesday. It is estimated to be over 300.

Soler and some 80 Ladies in White in Havana were arrested and beaten, along with dozens of activists and opponents who tried to gather at Coppelia Ice Cream.

The authorities of the regime organized youth activities in the same places that the opposition had gathered, for the purpose of repudiating them.

In addition to repression in Havana, dozens of activists, opponents and dissidents were arrested and beaten in Pinar del Rio, Matanzas, Santa Clara, Cienfuegos  Camaguey, Holguin and Santiago de Cuba provinces, according to reports from independent journalists.

In the town of Velasco, Holguin province, BRR members stormed the home of Damaris Garcia  located at 2501 No. 29th Street between Calle 23 and 32, Manuel Fajardo neighborhood, where 31 opponents had gathered.

“They have been hitting us, throwing stones, sticks, paint and even beating the children who are here with us,” said Garcia and the activist Rafael Friman.

However, a report published Tuesday by the official Communist Party newspaper Granma said that “There has never been a single case of murder, torture or extrajudicial execution  has never been a death squad or an Operation Condor” on the island.