14ymedio/EFE, Havana, 28 November 2016 — The memorial to José Martí in the Plaza of the Revolution opened its doors on Monday so that Cubans could say goodbye to former president Fidel Castro, who died on the 25th, and whose ashes have been installed in this emblematic place in Havana where they will remain for two days. People arriving in groups from their workplaces, and schools are assigned gathering points near to the Plaza.

Hundreds of people lined up from the early hours waiting for 9:00 in the morning (14:00 GMT) to render tribute to the Cuban leader in the same iconic scene where he delivered the greater part of his long harangues. The authorities asked people to come dressed in red, blue or white, without caps or hats. Some brought gladioli, others roses.

At the same hour that the tribute commenced there were, simultaneously in Havana and Santiago de Cuba, 21 gun salutes in homage to the Commander in Chief of the Revolution, who died at 90 years of age, after a decade removed from power because of health problems.

In the Plaza of the Revolution three different entry points have been set up to expedite people’s access, to three tributes, exactly alike, in none of which the presence of the ashes can be observed with the naked eye. All these points are presided over by a large photograph of Fidel Castro, in which he is seen in full body view looking at the horizon and wearing his iconic olive green uniform.

There are also two wreaths, one from the Communist Party of Cuba and one on behalf of the Cuban people, as well as an exhibit with the major awards Fidel Castro received in life.

Flanking these quasi-altars is a bodyguard of members of the Ceremonies Battalion of the Revolutionary Armed Forces and representatives from the Council of State, among whom are the Comptroller General of the Republic, Gladys Bejerana, the Minister of Transport, Adel Yzquierdo, and the Secretary of the Ministry of Transport, Homero Acosta.

Currently Cuban President Raul Castro is not present at the memorial, nor are other family members of the deceased leader such as his wife, Dalie Soto de Valle, or his sons.

People file past smoothly: there are women throwing kisses, many drying their tears with handkerchiefs, and some who cannot help sobbing, which resonates above the whispers and the sounds of cameras, in the solemn atmosphere that prevails. 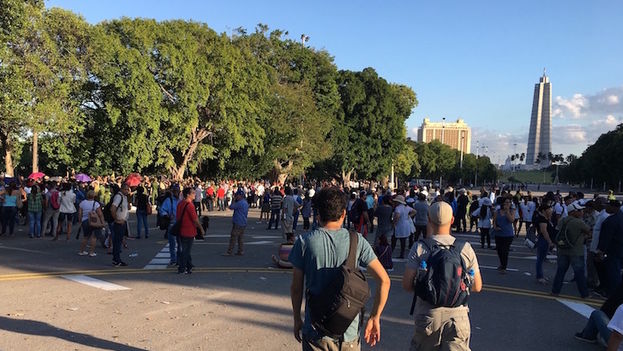 “I have come to due to patriotic and revolutionary duty, in hone or our commander in chief, who died as an undefeated comandante,” said Jesus, an 85-year-old man who engaged in the clandestine struggle before the Revolution in Ciego de Avila.

Also reluctant to say goodbye to the comandante were high school students such as Idolaris, 16, who while waiting in the long ling to enter the memorial felt “tremendous pain” for having lost a leader of his magnitude, although “his memory is always present.”

“There is a lot of sadness here. We are all very upset by the death of our comandante because we all love him from the bottom of our hearts, without hypocrisy,” Felix Jardines, a 58-year-old lawyer told EFE, while waiting in line to enter the tribute.

Although Cuba has experienced two days of mourning of the nine decreed by the government, this event marks the beginning of a week of funeral rites that will culminate this coming Sunday with the interment of Fidel Castro’s mortal remains in Santa Ifigenia cemetery in Santiago de Cuba. The residents of Havana will have until tomorrow to pay tribute to Castro in this plaza where, at 7:00 PM, there will a massive act of farewell, attended by leaders and personalities.