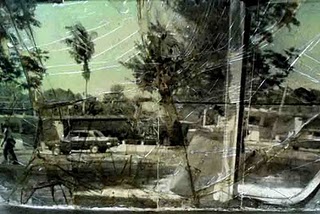 A JOURNALIST FRIEND FROM Bayamo told me that in 1990, when he was six, he was walking to school and his mother told him about the Special Period. Somehow, she was trying to prepare for the challenge to come. Later she confessed she had no idea how far it would go and how severe it would become. She never imagined she’d see and do what later faced Cuban society.

My journalist friend remembers his father and older brother, a graduate in engineering and computers, when they biked 25 miles just to pick up some yucca roots for the rabbits they had gotten in exchange for a television. His dad told him the soap opera wasn’t as important as nutrition. His mother closed her eyes and bit her tongue. My friend, from his childish point of view, protested and demanded his cartoons. His old man answered him that their food supply was more important. At that time, he thought his progenitor was unfair, because his hour of TV adventures was more important to him than food. After picking up the roots, they rode back another 25 miles, this time both carrying the weight of the bags on the bike rack.

Fortunately he doesn’t remember the canvas shoes his mother sewed, but he can’t forget the smell of the rice and tomato the family ate in order to save, for him, the last egg from the ration.

He also remembers the discussion between his father and brother, who got all worked up demanding the right to hide, in the sack with the roots, some pieces of yucca abandoned in the fields after the harvest. His dad angrily refused him: in my house we do not steal, dammit. His brother said that then he had no other choice but to leave and kissed them all, though his father did not return the gesture.

They thought that at most he would leave the house for a few days and then return. And the first days passed. Every time someone knocked on the door the old man signaled to open it, but he preferred to remain in his place and let another do it, he would stammer.

Then came the telephone call to the house of the neighbor. “Hurry up, it’s long distance,” they shouted.

“What’s that boy doing in Havana,” he grumbled. And he rejected the urge to run over and ask him when he was coming home.

My friend remembers that his mother came back crying. His dad protested, “We only cry for the dead,” he said.

His father tensed, something had happened in his family.

My friend remembers that his father started to cry like a baby, and nothing could calm him. They started to slaughter the rabbits because the old man lost the will, the strength to go the distance.

Now my friend is a journalist, he went to the University in Santiago de Cuba, and thanks to the economic help of his brother he could support himself in this unknown city without any family to support him. He has a computer. Clothes and money in his pocket.

“Thanks to my brother,” he told me. “What I can’t understand, or forgive, is that if we are both professionals, why do I have to live on his money?”