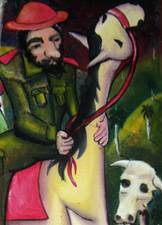 Fernando Damaso, 17 March 2017 — According to his brother [Raul Castro], later endorsed by the docile National Assembly of People’s Power, the “historic leader” [Fidel Castro] ordered that there would be no public establishment, street, avenue, park or building named after him, nor any monuments erected to him.

At first glance it seems a gesture of humility and modesty at the end of his life after a lifelong display of a overwhelming ego. However, there was no order with regards to the media, perhaps betting he would stay alive in them.

At least that is what emerges from the monumental and interminable media campaign about his figure and thinking, initiated before his death and continuing “in crescendo” to the present. Spectacles of all type, conferences, festivals, dances, songs, documentaries, expositions, and every kind of thing in that sphere, dedicated to him, offer reliable proof.

Should there be any doubt, the Book Fair, which is now touring the provinces, has surpassed all signs of servility with a sick personality cult; colloquia, conversations, workshops, expositions and much more, all in his honor and, in addition, the presentation by different Cuban publishers of 24 titles by him and about him, including three comic books about his life. No world personality, including Cervantes and Shakespeare, has had so many books on the stands of the fair, in addition to the official presentations each and every one of which is filled with the usual words of praise.

A close friend told me, “We are ruled by a dead man.” It appears he is right!