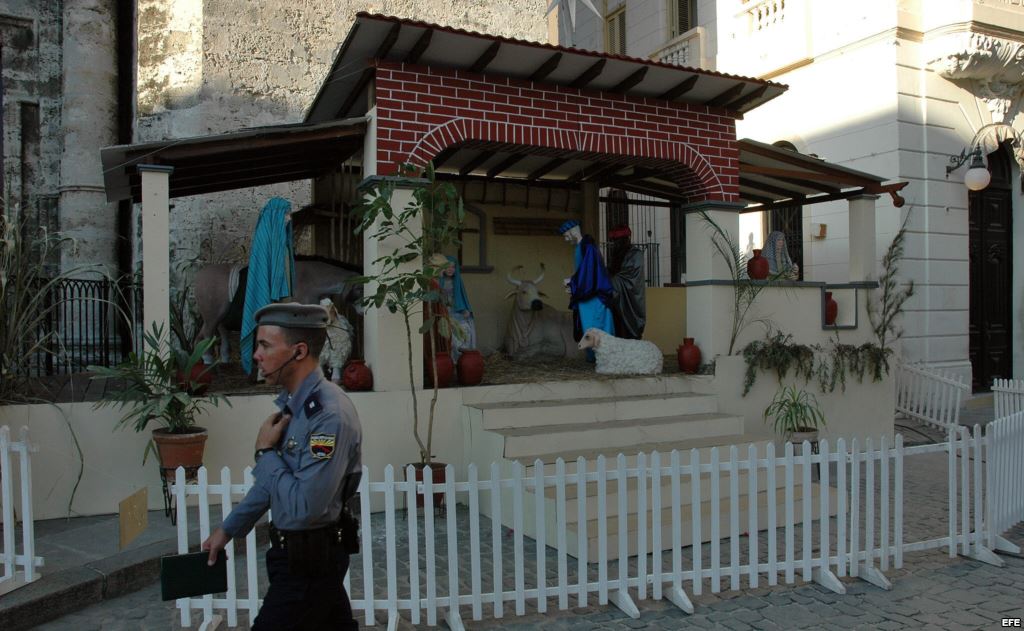 With a cloudy sky and rough seas which were dangerous for small craft, last Wednesday the 18th the Council of Ministers of the Republic of Cuba approved, as if by chance, the import of new and used cars into the country.

Dear God, they arranged the same media distraction when, in 1997, just before the visit of His Holiness Pope John Paul II to Havana, without any explanation, the revolutionary government, pen in hand, decreed, or re-decided, that 25th December should be a public holiday.

Since then, without fear, our grandparents dust and polish their traditions and, in spite of adversities, disguise the island with odours because, some more and many  less, on Christmas Eve they brighten up their homes with some pork, chicken, rice, beans, and food, preferably yuccas, seasoned with a delicious mojo sauce based on bitter orange and lots of garlic.  You can come across the same thing in the Christmas specials in restaurants.

A complete national calorie binge, uniting sad people, proud people, happy ones, peaceful ones, Catholics, non-Catholics, agnostics, protestants, devotees of the saints, masons, atheists, all of them, to celebrate the festivities and await the coming of a child who was born over 2,000 years ago.

They made use of all sorts of reasons to erase Christmas: The death of Ernesto Guevara, the sugar harvest period, revolutionary priorities, in the end, everything you all know perfectly well; but it was a Christmas message which paradoxically fell from the sky on December 24, 1968, which aroused the fury of the ex-commander-in-chief and after some mad cursing put an end to the celebration.

It turned out to be the Man, I am of course referring to the one dressed in olive green, seated to the right of a short wave radio tuned to VOA. Suddenly he heard the voice of astronaut Bill Anders approaching the moon’s dawn, and, instead of an announcement of war, read the opening verses of Genesis, expressing his admiration for the wonders of the cosmos and the greatness of its creator.

Fidel Castro went mad, he felt diminished, nevertheless he carried on listening, awaiting the sound of cannon fire, and received a bolt of lightning in the vein.

The transmission from the sky ended with: “And on behalf of the crew of Apollo 8 we will end by saying Goodnight, Good luck, Happy Christmas and may God bless you all on the good earth.”

His pride overwhelms him. He gets up, scowling, waves his arm in an arc and – like a Spanish dancer – stamps his heels as if the ground were Tablado de Corazones [Ed. note: quote from a poem by José Martí, El alma trémula y sola]. After a moment, they heard “………(a swear word), that’s the end of Christmas.”

That wasn’t all he suspended, from then on all religious events were victim to a bout of amnesia imposed by the triumphant young government of 1959. After about 30 years of exaggerated prohibition, it is making a comeback like a new opportunity. Our family-eclectic-religious cultural heritage and our traditions which were wounded by the Spanish conquest, cannot be erased by decree, they endure, this is the proof. HAPPY CHRISTMAS