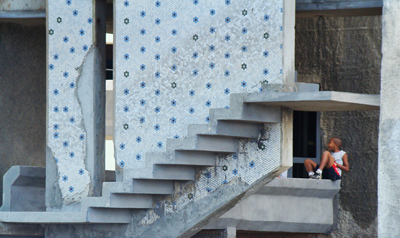 A relic of crumbling Soviet era architecture along the Malecon, Havana’s waterfront boulevard and seawall

Rarely does a person interviewed complain that a journalist has interpreted their statements to the letter; more frequently the opposite occurs, when, whether from negligence or malicious intent, a clear statement is ignored, mutilated or misinterpreted. So even though Fidel Castro has accustomed us to think of him as different from common mortals, we were surprised when he said he meant the exact opposite of what he said when he told Jeffrey Goldberg from The Atlantic magazine that, “The Cuban model doesn’t even work for us anymore.”

As if they were mutually exclusive arguments incapable of sharing space in the same brain, the once great rhetorician rejects the journalist’s interpretation of his words, arguing that, “My idea, as the whole world knows, is that the capitalist system doesn’t work for the United States, nor for the world (…) how could such a system serve for a socialist country like Cuba?” Those of us who read Goldberg’s report of the interview, and then heard the verbal juggling from the Maximum Leader as he spoke at the great hall of the University, were left very confused.

If someone wants to get an idea of the uncertainty such declarations have generated in Cuba, imagine for a moment that after 50 years of marriage, a husband learns that his wife has told her best friend that their marriage doesn’t work. When asked to explain her indiscreet comments she responds, “What I think is that the marriage of the couple across the street doesn’t work… Who could possibly think that I’d now like to marry my neighbor’s husband?”

I don’t know who is best able to analyze this issue. A philosopher to dismantle its sophistry? A linguist to better organize the words? Or a psychotherapist to explore the Freudian slip hidden behind the declarations of el Comanadante. For those of us who were born and came of age under the social experiment he tried to shape in his image and likeness, to hear such self-criticism leaves a bitter taste that feels very much like betrayal.

I recall that when I first heard his words I wrote a little message and immediately published it on my Twitter account: “Fidel Castro joins the opposition.” A friend who read my brief opinion called me urgently at home to confess that, “If he has joined the dissidence, then I’m moving over to the government.” We Cubans have spent the past week living with jokes of this type, along with expressions of surprise, not to mention quite corrosive opinions about the mental health of the persistent orator. Even the worry about the economic problems, and the imminent layoffs of nearly 25 percent of the country’s workforce, fade in importance. No one has been able to remain indifferent to such a monumental slip of the tongue.

Since he dropped his official responsibilities because of ill health, Fidel Castro has barely spoken of our country and its problems. He frequently publishes Reflections on environmental matters and the threat of nuclear war. Now, since his recent “resurrection” he again appears in public wielding the microphone, his favorite instrument of the last half century. In the four years he has been out of power, he hasn’t addressed a single word to the way his brother Raul has performed for the country; and now, this ambiguous allusion, referring to the functionality of the Cuban model, is the first we have heard, after so much time avoiding the subject.

Nowhere in the interview did Goldberg interpret his words to mean that Fidel Castro is recommending American capitalism for Cuba; rather he simply respectfully transcribed the controversial phrase which the ex-president himself acknowledges having said, “without bitterness or concern.” And where do these enigmatic four words come from? Could it be that the bitterness and concern within the heart of the Maximum Leader are captured in that idea — which he assures us he wanted to express — that capitalism no longer works for anyone?

The bitterness is felt today: by the families of the internationalist who died trying to bring the Cuban model to so many countries in the world; by those who renounced the pleasures of youth, sacrificing the best years of their lives to make the model work; by the sincere members of the Party, expelled from the organization for much less severe criticisms; by those who lost their jobs for an inappropriate comment; by those who ended up behind bars for opposing the model; in short, by those who had the insight to see that things were no turning out as expected, who said so in good faith, and who received, in return, only disproportionate punishment. They all have the right to feel frustrated and above all fooled by the irresponsible man who assumed the post of wise clairvoyant marching in the vanguard along a path that led nowhere, and who now fears that alternative paths lead to dead ends or, even worse, back to the starting point of — oh! horror! — the capitalist past.

The concern that all of us who inhabit this Island share is that we will find we are a nation bereft; a nation where the programs, and the euphemisms of “to perfect” or “to actualize” the system, cannot explain clearly where we are going, although everyone knows by heart the meticulous description of the Utopia that we could never reach.