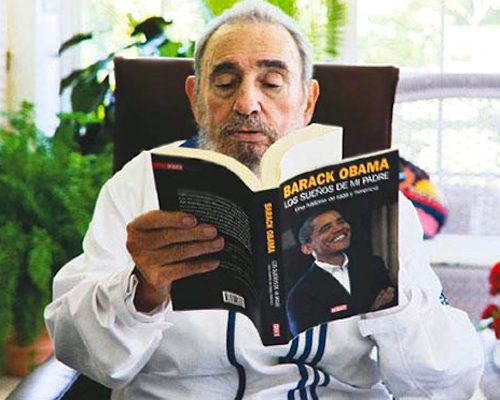 Cubanet, Miriam Celaya, Havana, 18 December 2014 — After the brief speech by General-President, Raúl Castro, about the release of Alan Gross and of “a Cuban-born citizen” at the service of the CIA, and of other prisoners who received “prison benefits, including the release of individuals the US government was interested in,” a speech which also included the announcement of the re-establishment of diplomatic relations between the two countries, everyday life in the capital continued its course, just as if we were not witnessing a moment of historical significance that puts an end to 50 years of uninterrupted disagreement between our two countries.

With agreements reached after months of negotiations, the regional political landscape changes dramatically, while such a controversial decision should, in principle have a greater effect inside Cuba, since Cuba’s excuses have run out about “the enemy” that besieges us, blockades us, and hampers our social and economic advancement.

Of course, it would be naïve to assume that the regime will make essential changes or allow an opening in political or human rights matters, particularly those relating to freedom of expression and association, just to name the some of the more “dangerous” elements for the survival of the regime. It’s the same quasi 56-year-old dictatorship of totalitarian power, and it is likely the regime will make use of any trickery to evade changes that endanger its authority in Cuba. However, that does not mean that the do-nothing strategy on the part of the US foreign policy towards Cuba was a good formula.

The strategy launched today by the White House, though risky, placed the Cuban leadership against the wall, especially in the face of the international community that, to date, has passively tolerated the ongoing violations of human rights in Cuba, and has even praised the Castro satrapy for its achievements in health and education through the continuation of a belligerent policy towards the most powerful country on earth and the supposed need for the regime to defend itself from it. With the ending of the stagnation and the re-establishing of relations, now we will have to see in what direction the actors move and the resulting changes that the new stage will produce.

We know the weakness of the nascent Cuban civil society, of its legal orphanhood and of the absence of supporting autonomous institutions, so that, on the road towards the achievement of democracy, the support and goodwill of civilized countries and of global agencies cannot be absent, under penalty of sentencing to their doom the efforts, sacrifices and aspirations of several generations of democratic Cubans. The US President seems to be aware of it, since he expressed his commitment to those hopes in his speech.

The news came as a surprise to Cubans. However, contrary to what might be expected from so many years of the “struggle for the return of the Five,” and after the substantial resources invested in international campaigns to achieve their release, there or was no apotheosis of people taking to the streets, no calls for a gathering to welcome them home, no live TV broadcasting the arrival of the much awaited “heroes.”

Havana continued its normal routine, altered only by the unexpected delivery of a pound of fish (mackerel) per consumer, an event that overwhelmed people’s expectations, at least in Centro Habana, and the corresponding lines began to form in front of the state-owned butcher shops.

Meanwhile, a group of students were mobilized at the University to do some cheering and shouting; though it still unclear whether the real reason for their joy was the release of the spies or the sudden opportunity to leave the classroom earlier than usual.

Only the primetime evening news ran a brief story, carefully prepared and intended to stir the popular sentimentality, showing the reunion of the released spies and their families, and the words of ringleader, Gerardo, expressing to the General-President his availability to follow his orders. “For whatever purpose,” stated the unrepentant servant. It did not occur to the little soldier to think that, in an environment of good relations that should begin to flow between the two countries, a new espionage adventure would not look good.

The truth is that, in contrast to Alan Gross’s obvious physical deterioration, the Cuban spies looked fat and pompous, as if, instead of having stayed in harsh prison conditions that the official media had blasted, they had returned from a picnic or a long vacation.

The topography of absence

His absence from the media had already been sufficiently notorious during and after the celebration of the ALBA summit, ten years after the creation of that pipe dream for him and his pupil, Hugo Chávez. But his silence, in the presence of two events so linked to his existence as the end of a story of conflict on which the revolutionary legend was cemented and the arrival on the Island of the central characters of his last “battle,” is highly eloquent.

It is very significant that the return of the three spies has been so rash. This may be the happiest event year for the reflective chief, yet not a single apocryphal note with a copy of his well-known signature at the bottom of the page has appeared. Everything indicates that, either the highest druid has definitively plunged into a deep vegetative state, or he has already left this “valley of tears.” If that should be the case, don’t count on mine.