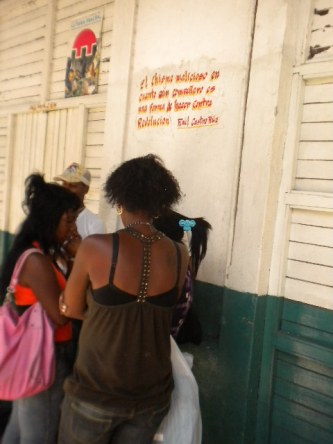 The cables from Julian Assange have brought happiness to the Cuban government because of the opinions of an ex US diplomatic section chief about the dissident movement. The usual morbid people are waiting for the names so they can entertain themselves with the joke missing from an issue of Hola magazine. I’m not interested in those names, I’m not even interested in the subjective validation that Mr. Farrar’s words give to the discredit of dissidents inside and outside of Cuba.

I don’t belong to any party, but I’m friends with some “historical dissidents” whose politics are foreign to me. Old? I wouldn’t dare to affirm that, seeing the average age of the Party’s Politburo. And if today there is something that has been given the name of “new” or “young” dissidence, it stems from the antecedent filled with courage of this long road of dissent.

When one wants to argue about the lack of integrity of an opponent, better they should abandon the topic and head to the beach, or have lunch or a beer. And I say this for those who demand sacrifices, and then spend their own vacations in Cayo Coco or on Margarita Island. Before, the government had a monopoly on images. Now anyone can wield a phone or a camera.