Jeovany J. Vega, 19 APril 2015 — When on this day, Sunday, 19 April 2015, the last poll closes, nothing transcendent will occur. Despite the statistics manipulated by the newspaper Granma and its libels about an electorate that presumably will have gone to the polls freely and massively to give its “absolute support” to the Revolution, at this stage that never-ending story will deceive very few people.

Irregularities at the polls; ballots that can only be marked “with pencil!” so that they can later be adulterated and thus avoid generating inconvenient statistics; candidacy commissions controlled by the only legal party in Cuba (the Communist one) who handpick the president of every assembly from the municipal level on up to the Council of State: assemblies all of which from San Antonio on the west to Maisí on the east will decide nothing outside the line approved by the one dictatorial party, and they will question nothing, but rather during their time in office they will do nothing more than unanimously approve every “guidance” emanating from Olympus.

The people of Cuba know only too well that they cannot expect anything new from this farce, that this scheme is all played out and will never offer new paths, that it is only more of the same. Thus I will not beat a dead horse but rather today I will reflect on one detail that emerged weeks ago on various online sites: in an event practically without precedent, two dissidents from Havana managed to be nominated as candidates as potential delegates to the National Assembly of People’s Power by their respective districts – something almost unheard-of in today’s Cuba.

Even so, Hildelbrando Chaviano, from the Plaza de la Revolución municipality, and Yuniel López O’Farrill, from the Arroyo Naranjo municipality, had to resign themselves to being branded as “counterrevolutionaries” in their published candidate biographies, as being part of what the nomenklatura calls “splinter groups,” among other pejorative names — outright calumnies and propagandist accusations.

But beyond it being certain that these candidates in effect openly oppose that concept of “Revolution” sustained by the Demagogues-in-Chief of the Communist Party of Cuba, I ask myself: And the other candidates, what about them?

Perhaps it will not be published in the rest of the biographies, for example, that a certain candidate, despite being an “honorable” Communist militant, also increasingly embezzles the resources of the state-owned enterprise that he runs?

Or that other one, a fervent member of a Rapid Response Brigade and participant in multiple repudiation rallies “in defense of the Revolution,” has been expelled from various positions because of continued stealing?

Or that this one, always the enthusiast in any Mayday parade that is organized, nonetheless also manages to loot any state-run warehouse that falls into his clutches?

Or that this dedicated Party comrade does not live off of her salary, but rather thanks to the natural talent that her prostitute-daughter has deployed in a chupa-chupa — something she is well aware of and approves?

Or that this old CDR-member, so combative in denouncing any countryman who enters his field of vision, yet he tolerates the sale of black-market tobacco in his own home?

Or perhaps that a certain veteran of the glorious Combatants Association does not live off the absurd pension “guaranteed” by his “Revolution,” but off the remittances arriving from that troubled and brutal country to the North that he despises?

Or that this other functionary from the provincial party lives like a millionaire thanks to the shamelessness of her husband, one of the thousands of thieves legalized by the General Customs office at the Havana airport?

To enumerate the list of moral duplicities and corruptions would make interminable the biographies of a good portion of the current candidates — and it would be even more rotten were we to ascend the ranks from the municipal to national levels.

The publication of these biographies filled with distorted information and morbidly dissected — specifically in the context in which they try to dissuade potential voters — well deserves legal action from a respected electoral authority, even the prosecutor’s office — but this would only be possible if we lived under the Rule of Law, and never in the totalitarian Cuba of today.

At any rate, if this were about competing on a level playing field for the vote of the electorate, according to what is established by law, it would be very healthy to air everyone’s dirty laundry and expose their shit equally (and I do not say that the militancy or sense of civic responsibility of Hildelbrando and Yuniel are such).

If this were to occur, I assure you that the stink would rise high and spread far in a country where half a century of absurd laws and legal limos have not left barely a place for honesty and individual prosperity to be sheltered under the law.

Let us be absolutely certain of this: today in Cuba, the “voting” will be done by millions of hypocrites and criminals. 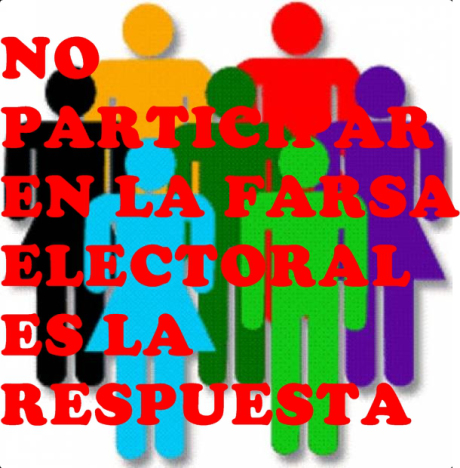