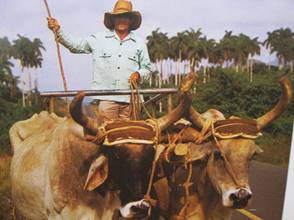 For several days now the national TV has been reporting on the effects of the drought in the eastern provinces, noting the deaths of thousands of cattle and the weakening of many thousands more. In the municipality of Calixto García in Holguín Province alone, over three thousand cattle have already died and thousands of others, according to the images shown, were only skin and bones, due to their emaciated condition, harbinger of the worst.

The drought is every year, from November to April. Maybe in the last years, due to climate change, it has worsened. The farmer always used forecasts to avoid or mitigate its effects.

Fifty years ago our ranchers also faced it and, given that they were cattle owners, they took every possible measure to ensure they were fed, with the silage in the silos saved from tender green grass cut in the spring, to which they added molasses and water, or with other methods to resolve the water problem, such as windmills used to extract ground water.

For them it was an economic and human problem, affecting both their pocketbooks and prestige. As owners of their herds, they were primarily responsible for them and felt and acted accordingly.

Today, the small livestock owners avoid killing their cattle despite the drought. The problem with the cattle is that, in one way or another, they belong to the State. As here ownership is generic and irresponsibility is diluted between the manager, the Party organizations and the Young Communist League (UJC), the union and so on up the ladder, the Delegate of Agriculture and the whole administrative and political structure that follows, the ones who pay for the inefficiency are the poor cattle and the citizens who, for years, see no beef in their diet. In a country where sacrificing a cow, even one you yourself own, is considered a crime if it is not approved by the authorities, how can we understand these mass deaths.

Is it so difficult to create reserves of food and drinking water for when the drought comes? Why, if it is a regular annual phenomenon, which complicates the last months of the dry season, aren’t the cattle in danger moved to unaffected territories?

It seems that fifty-six (56) years of tripping over the same stone have been for nothing. And then, thundering, they would have us believe that socialism can be prosperous and sustainable.