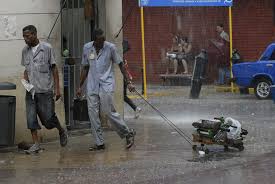 HAVANA, Cuba, December 2013,  www.cubanet.org.- . It’s frightening the number of housing collapses that have occurred in Havana, up to the end of November and in the first days of December. Officially, there have been 227 collapses, including 26 which were total and the rest partial. 627 individual families have been affected. They haven’t listed the localities where they occurred, to enable one to check the accuracy of the figures, and whether those identified by human rights organisations are included in the official government report.

In most of the neighbourhoods of the capital, including Miramar, which is crossed by 5th Avenue, the sewage system doesn’t work. When there is a downpour, the streets flood and the traffic is affected. But the drains appear so clogged as if they were cemented up, and some houses at a higher level also flood, because the gutters in the roofs have no way to run out onto the streets.

There are streets which remain full of mud and debris. That makes getting about difficult, including on the pavements, which are already affected by trees, whose roots break the concrete and form potholes which make it difficult to pass. In some municipalities like Centro Habana, Habana Vieja and Diez de Octubre it is dangerous to pass down the streets because the balconies are at risk of collapse, and the buildings too. 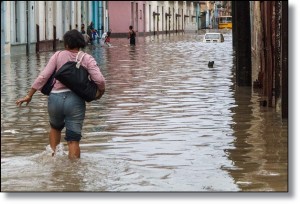 Given such government apathy, most of the streets have dumpsters crammed full and overflowing, with great mountains of solid rubbish. The divers, which is what they calll the people who rummage in the dustbins, spill the rubbish and the surroundings are converted into focal points for possible disease. And when it rains, like in recent days, this trash flows down the streets with the water.

Although you don’t see cats in public spaces, because they end up as the main course on the dining table of the Cuban poor, the dogs are all over the place, covered in scabies, near food shops. They also enter into some shops and annoy the customers.

The bicycle taxis go the wrong way along the streets, especially in Central Havana, endangering the lives of passers-by. The mobile salespeople also, in accordance with their custom, move their carts along different streets, and park them on any corner, dumping the waste from their sales. Both situations produce problems when it rains. 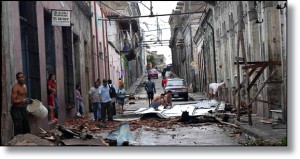 It’s very hard to find a public toilet in the city. If there is one, there is someone there who charges for its use, and because of that many people have used rubbish bins on the corners, out-of-the way columns, and other uninhabited places, as toilets. Even worse, those that have some sort of shelter, because they have walls, have been converted into accommodation for sexual acts.

The water falling washes away substantial quantities of urine and excrement from those sites.

The list of problems is endless, but the most unbearable is that there won’t be a solution, not even with the 10 million guidelines of the Cuban communist party, because solving the problems requires financial resources and political will, and both things are absent in the government’s programmes.