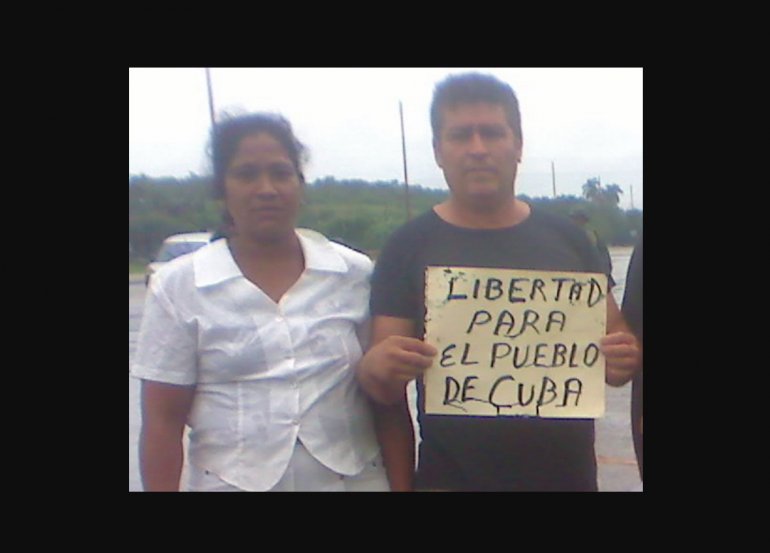 Juan Juan Almeida, 27 February 2017 — Luis Enrique Cepero García was an opponent of the Cuban regime serving a sentence in the Combinado del Este prison when he decided to infect himself with a disease rather than continue being subjected to mistreatment in prison.

Given his state of health, Luis Enrique was transferred and imprisoned at the Pedro Kouri Institute of Tropical Medicine (IPK) in Havana where, on orders from a doctor, his life ended abruptly one day in 1995.

“I remember that before he died in the IPK, my brother Luis Enrique told me that a doctor told another doctor he would not be there the next day. My brother began to have some tremors. Then in the afternoon a nurse came into the room and began putting cotton in his nose, mouth and anus. My brother died and I was left with that image in my head.

“Then I did something I should never have done. To take revenge I joined the Committees for the Defense of the Revolution (CDR) and pretended to be a revolutionary in order to get inside State Security and take my revenge for the death of my brother,” says William Cepero García, who today is a former spy living on Santa Maria del Rosario Road, kilometer 4.5, Cubicle #106, Cambúte, San Miguel del Padrón, a district located in the east of the Cuban capital.

When Luis Enrique died, William was living in Old Havana, buying and selling antiques. He started pretending to be a revolutionary. He says that, with his money and growing popularity, it was not difficult to attract the attention of the Cuban secret services.

“I started at the CDR… Well, you know how that works. In 2005 I was approached by officers from DTI (Technical Investigations Department) who wanted to recruit me. But I told them that, if I was going to do something for the Revolution, it had to be something big. It was then that I met an officer by the name of Yosbani, a young man from a Domestic Counterintelligence unit in Old Havana. He was the one who recruited me.”

I met the spy

“It’s all a surprise to me,” says Luz María Piloto Romero, a Cuban dissident who now lives in exile in Miami. “I met William Cepero García because he was living in Old Havana around the corner from my house. His brother, the one who died from HIV, was a good friend of mine. I always saw William at non-violent opposition events in support of human rights.”

Cepero García says that, after several exams and countless meetings at the Municipal Identity Card Directorate’s offices, he was instructed to collect information on people in the area who sympathized with opponents of the government.

“At first I was very frightened,” he admits. “I realized that the people I knew were innocent but, after a few months working as a spy, I determined that the information I was giving to my official contacts had already been given to them by other agents I did not know.”

Cepero García remembers being sent in 2005 to Cambute in San Miguel del Padrón, where there as an active opposition movement. He says that there he was part of a group under the direction of the local Domestic Counterintelligence office. He began trying to penetrate the Cuban Human Rights Foundation, an opposition organization then headed by Juan Antonio Bermúdez Toranza.

“I very cautiously tried to warn Juan. I didn’t know whether or not he was also a State Security agent and did not want to get burned. Everything here has been infiltrated,” he says.

But Bermúdez Toranza, who currently lives in exile in Spain, says, “William came out from the shadows. It was Juan Carlos who introduced him to me.”

He is referring to Juan Carlos González Leiva, a blind attorney, activist and founder of the Independent Blind Fraternity of Cuba and the Cuban Human Rights Foundation.

“William approached me offering to help. He was interested in my needs,” adds Bermúdez Toranza. “His help was economic. He was a guy who moved money around, dealing in antiques, jewelry and those sorts of things. But he was asking a lot of questions; he wanted to know everything. He never disagreed with any of my decisions and it isn’t normal to agree with everything. I never trusted him. I always compartmentalized with him because I suspected he was working for State Security.”

Two years later Bermúdez Toranzo was arrested and charged with counter-revolutionary activities. William left the area but returned in 2009 with a new mission. “Juan (Bermúdez Toranzo) was in jail and his then wife, Neris Castillo, was one of the Ladies in White, and my new mission was to insert myself in her life, get information on the Ladies in White, blackmail her and sleep with her… You know how these things go,” he says.

“He told me he had come to carry out a task but he didn’t have the courage for it. He told me about his brother. I saw him trying to help young men who had decided to set out to sea and other people I can’t remember right now. That’s why I took him to what was then the US Interests Section in Cuba, to the human rights office, so he could provide information and decide whether to switch from one side to the other,” explains the former Lady in White, Neris Castillo Moreno, who is now Cepero García’s partner.

“He helped a lot of people. When my brother was taken prisoner, William helped him. After being in a jail myself for a week, there was nothing to eat at my house  and he said to me, ’Let’s go, Luz. I’ll fix you a sweet roll.’ And he did. I hope that all the people he once helped might now help him. Actually, I was surprised by the news,” says Luz María, a Cuban dissident who now lives in exile in Miami and says she knows Cepero Garcia.

According to Cepero García, his work as a double agent earned him enough credit with the regime’s intelligence agencies that they ended up giving him the mission to become the leader of the Republican Party of Cuba and later the secretary general of the November 30th Frank País Democratic Party after the death of the previous office holder.

However, after receiving a new mission from officials at Cuban State Security, which Cepero García had allegedly infiltrated years earlier, the self-described “double agent” decided to reveal his true identity and expose himself to the risks inherent in such a decision.

“I fear for my life but I am aware of what I have done. I have to face whatever comes.” And here his story ends.

Meanwhile, the exiled Cuban dissident living in Spain, who is familar with the spy’s performance in San Miguel del Padrón, insists that Cepero García’s true intention in making this revelation is to leave Cuba.

“What William wants is a visa to the United States. I know he is a spy and that he has regrets and that he helped people. But, look, if William is saying that, he is not doing it because he is in charge or because he wants to say it. He is saying it because someone is ordering him to do so. And I assure you it is someone in Section XXI (of G2, the Intelligence Directorate),” concludes Juan Antonio Bermúdez Toranzo categorically.