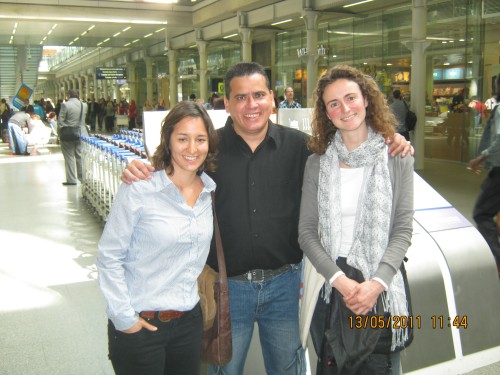 The future is unpredictable and our day to day experiences prove this. Just a few months ago my life was being consumed in a jail cell of the Canaletas Prison in the province of Ciego de Avila. Meanwhile, in other corners of the world thousands of people prayed, suffered, and demanded that the dictatorship of Havana free all the political prisoners and prisoners of conscience being held in Cuba. I never imagined that I would be able to personally thank and share some unforgettable moments with a large group of activists from Amnesty International in the United Kingdom.

In the London airport of Gatwick I was being awaited by Robin Guittard, a young Frenchman with incredible charisma and who dominates the Spanish language very well. After eating dinner, I went to bed with lots of curiosity about my upcoming agenda. I spent my nights at a hotel which consisted of constant movement of young people, apparently most of who were international students, for most of them spoke a diverse range of languages, and this made my stay all the more pleasant.

The following day, I met with four other human rights defenders who each represented different continents. They invited us to the annual report made by Amnesty International and for the 50th anniversary of this foundation. We were welcomed by the Secretariat General of Amnesty International, Salil Shetty.

As the hours passed, the interviews intensified. For me, the most important part of it all was to explain that absolutely nothing has changed in Cuba despite the release of more than 50 political prisoners and prisoners of conscience. The regime has tried to clean its deteriorated image and lacks the will to initiate a peaceful transition. During each dialogue with journalists I explained to them that they should closely follow the events which occur on the island, for Cuban dissidents are highly vulnerable to the dictatorship’s repression.

I also made sure to emphasize that, in Cuba, there exists a dictatorship which for more than 50 years has subjugated our people, while violating and amputating the inalienable rights of all Cubans. Unfortunately, the international left has had a sort of romanticism with the dictatorship of Fidel Castro and the highest price of that amorous relationship has been paid by us Cubans with deaths, imprisonment, exile, and the overall ruin of our nation. Luckily, however, many others have understood the damage they have exposed us to.

In its 2011 report, Amnesty International harshly condemns countries that violate human rights and it doesn’t use selective standards, but it seems to me it is more critical of many western democracies than of some dictatorships. It is certain that democratic governments allow international organisms to periodically visit their countries in order to observe their situation, while dictatorships impede such activities.

In the case of Cuba, Amnesty International manifests that they have no way of verifying, through other international NGOs, what goes on in the jails. At one point in the dialogue I commented that the situation in the Cuban jails is untenable and very delicate, and possibly, due to lack of hope, the country with the highest rate of prisoner suicides in our region. Lastly, I pointed out that, in their annual reports, they should reflect the fact that the Cuban government does not allow international observers into their prisons. Or into their country for that matter. Cuba is one of the nations in which Amnesty International does not have an office, and it is all because of the government’s lack of will to allow it.

After debating about a diverse range of subjects we went out to dinner. While at the restaurant we chatted about some of their campaigns in favor of freeing Cuban political prisoners and prisoners of conscience, and I spoke about my experiences in captivity.

On Friday, I was able to contact Catalina Cortes from the Rory Peck Training Fund. This foundation has always been committed to the situation of imprisoned journalists and their families. For them it is very important to know our necessities and the state of vulnerability we find ourselves in. It was a fruitful meeting which was filled with hope. The fundamental subject was about a colleague in Cuba who needs to recuperate his vision, for it was deteriorated after nearly 8 years of imprisonment. They want to help him, as do I. Now, it is up to the will of the Cuban regime, and I would hope they treat this as a humanitarian gesture and not a propaganda campaign.

Later that afternoon I had lunch with Sue Bingham, Carolina Roman, Gerardo Ducos, and other Amnesty activists. Sue, a woman with a cheerful attitude and very committed to her work in favor of human rights. I was impressed by her kindness, friendliness, cordiality, and her commitment and knowledge about my country.

Upon concluding lunch we assisted a meeting with various people who always demanded freedom for the group of the 75 from the moment we were all jailed. I could not believe that I was in the headquarters of Amnesty International in the United Kingdom.

It was here that various campaign for my liberation were established. I had the chance to personally meet people who did not rest until they saw me free and who now continue to do the same thing with other prisoners of conscience in the world. Their work does not finish as long as their is injustice in the world. This meeting was truly one of the best things that has happened to me- I laughed, I cried, and I enjoyed each moment with deserved intensity.

Chatting with Kate Allen, director of AIUK (Amnesty United Kingdom), Ruth Dawson from the group of individuals at risk, Shane Enright (Director of the campaign in favor of unions) and others, besides incredible was unforgettable.

I was far from imagining that the most emotional part of it all had not yet occurred. Sue had prepared it all with absolute precision and reached my most sensitive emotions. The power of human solidarity is amazing. It tears down walls of silence, shatters chains of oppression, pierces the bars of intolerance, and reaches the conscience of humans, even that of the oppressors. In the following chronicle I will tell about it.