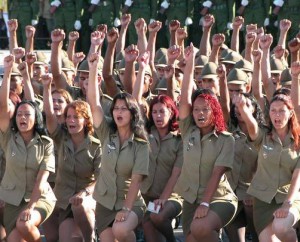 HAVANA, Cuba, 27 September 2013, www.cubanet.org – The generalship of the regime is showing particular interested in incorporating women into the army. In several sites in Havana where people gather signs have been posted lately calling on young unemployed women to sign up for active military service. The proposal includes two supposedly tempting benefits: a starting salary of 450 Cuban pesos a month (the basic salary of professionals in Cuba), and the chance to take advantage of the so-called Order 18, of the Revolutionary Armed Forces, which allows them to opt for university majors of their choice, with study facilities, according to their new circumstances.

Suddenly, one might think that this project is another nod from the regime to international progressives, whose members might easily have noticed the rancid sexism that prevails in the uniformed forces on the Island, where, if they are not abundant, there is also a lack of women, though they fill ornamental roles.

It seems then, that among the “reforms” to update their particular socialism, the generals resolved to finally grant women their rightful place among the ranks. However, if that were the purpose, it’s thinly reflected in some of the details of the call. For example, the professional salaries (which aren’t) that these young women will be paid from the start, don’t seem targeted to stimulate their attraction to the military life, because during their first two years they will work as civilians in the mosquito vector campaign, work already performed by hundreds of thousands of women and men (for a much lower salary) without the academic requisites they are demanding from potential candidates.

So these girls are not going to serve directly as the olive-green uniformed, nor are they going to study in the military academies to become technicians and officers in the army. Apparently, their recruitment will not entail any direct benefit to the FAR. They are being called to take on a civilian task, for which they will receive a “privileged” salary, along with other facilities, on behalf of an employer who does not need them.

This leaves some doubts in the air, in addition to two or three half-baked conjectures.

Is the call nothing more than a new strategy to confront the practice of prostitution, continually growing and more scandalous among young Cuban women? Do the generals really believe that with a salary equivalent to less than 20 CUC a month, and offers of university entrance, they are going to manage to recruit girls en masse for their later control under the military regime? If so, why summon only those with twelve years of schooling? And why does it have to military who take on an eminently civil responsibility? Is it that the civil institutions are not sufficiently reliable, or they can only attract these young women with the economic incentive needed to inflate the payrolls, only to encourage these young women?

Any effort is welcome to try to contain the marked tendency of young Cuban women today towards prostitution. But paying a professional salary to high school graduates to devote themselves to hunting mosquitoes for two years, doesn’t seem a very lucid approach, neither in terms of civic rescue, nor as a response to the demands of the gender advocates.

To make matters worse, the decision contains at least two staggering inconsistencies. On the one hand, those who work in the mosquito control campaign have had their wages lowered recently, to the point that these girls would earn 100 Cuban pesos more to do the same job, but with less experience. On the other hand, it represents a useless swelling of payrolls, at exactly that time when they’re talking about laying off the hundreds of thousands of State employees as the regime insists on the need to eliminate unproductive jobs.

The anxiety of the generals before the imperative to win the support of these girls is understandable. Especially if we give credence to the assumption that the heir to the throne, Mariela Castro, convinced them that any good work they undertake against prostitution, shall be promptly rewarded by the praise of liberal forums and the international press. But it wouldn’t cost them anything to chart their strategies better, so as not to so obviously shoot themselves in the foot.

José Hugo Fernández. Note : The books of this author can be purchased here.