Translated from an interview by Ivette Leyva Martinez in Cafe Fuerte.

After 19 days of detention in a police station in Havana, Antonio G. Rodiles returned to freedom convinced that the best path to a better Cuba is through the rejection of violence.

Rodiles was released on Monday afternoon after authorities agreed to the request of his lawyer to withdraw the charges of “resistance.” His violent arrest sparked an intense campaign of international solidarity.

CF: What do you take away from this experience?

AR: I say to my friends and others with whom I have spoken, that my main experience is that at this moment in Cuba there are a great many people who understand that the country has to change, and that people thinking differently, that people having different views of things, political, ideological, is not a reason for people to hate them or to not respect them but, sadly, there is a group of people who up to now have demonstrated that they have carte blanche to use violence, who are committed to creating situations like this one and I think, what’s more, they are committed to creating even more critical situations.

I think it’s very important that all national and international public opinion support civil society activists because these people are not the preponderance of the people in this country.

Definitely what they did to me was a vulgar beating and it was planned by them ahead of time.

CF: Your followers and the people who have followed your case insisted that there had been violence especially against you. What precisely happened that day of your arrest?

AR: An official who has become known for beating and abusing people, whose alias is “Camilo,” crossed Avenue 31 [in the Havana municipality of Diez de Octubre] with a group of people, crossed directly to beat me. He says “identificaiton” or “ID card,” something like that, but simply to mention it. No one in uniform came, they didn’t identify themselves, and they immediately pounced on me.

When I put out my hands so they wouldn’t grab me, they rained punches down on me. They grabbed me by the neck, and threw me to the ground, there was a group of between 10 and 15 people — people who were there said it was something like 12. And when they threw me on the ground they began to kick me, to punch me, and at that moment someone punched me in the left eye, thank God their knuckle didn’t go into my eyeball, only the edge, this gave me a strong contusion in the eye which even bled. After they picked me up, they took me to the cop car, and against the car they were still hitting me, in the chest, all my ribs, it was a total beating. Thank God I didn’t have any fractures but I certainly could have.

CF: In the dungeon, what else did they do and how did they treat you?

AR: When they took me to the detention center on Acosta Avenue, which is a center for ordinary crimes of the Police Technical Department of Investigations (DTI), on arriving there, there was still this individual Camilo with two other characters he goes around with, who were also trying to provoke me, manhandling me, trying to provoke an incident.

This individual Camilo recorded me with a video camera, everything that was going on, but there appeared a major from the police station itself and these things were stopped until they took me to the cell. And yes, the next day, the people who had charge of me in that place had a completely different attitude. It was one of total respect, both physically as well as my moral integrity. I had medical attention, the doctor was a very kind person, she checked me over completely, looked at my eye, healed the eye. And the officials there, of the police, they behaved with respect.

It’s also incredible how the prisoners identify with people who come there for political reasons and they always call you “political” and the people are in solidarity with you.

CF: Do you think the delay had to do with having you look better before they let you out?

AR: Yes, it’s possible that had some weight, evidently there was a lot of pressure from many different directions, I think. What they were trying, in my opinion, was a short detention, of a few months or something like that… but at first what they did was very rough, they made a circus out of it, including statements they made themselves that didn’t apply to the crime of “resistance” and then at the end they simply didn’t have much of a way to justify what was happening and well, they released me. 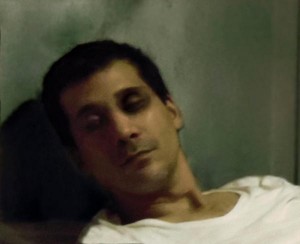 CF: The photo that was distributed showing you in the cell, is it real?

AR: As I have mentioned to several people I would have to look at it in detail, and since I got out the phone hasn’t stopped ringing. If it was taken, it was taken while I was sleeping. No one took any photo of me while I was awake, although they took a video on my arrival. But I can tell you, I have to see the photo calmly to be able to analyze it. I saw it from above, if it shows I was hit in the eye, and it was that area, I had a shirt like that, the color of the walls was similar and those things.

CF: What do you think the intentions are between the work of the police and the strategic tasks of the State Security?

AR: That’s hard to know being in a cell, is something that I can not fully distinguish, what I can tell you is that contrasting the treatment and attitude of the people of the State Security, who are clearly unscrupulous people, they strike without any restraint, and the treatment received at the DTI station, it was completely different.

CF: Will you continue Estado de Sats? What are your plans now?

AR: The project of course will continue and I would say even more forecefully. The idea of the project Estado de Sats, of the campaign “For Another Cuba,” has to do with respect for the rights of Cubans, with respect for the human being first and foremost, with the opportunity to debate, to openly discuss, and I think that with this beating this was the main thing they showed me: this way is the way for Cuba to change, and clearly violence is the enemy. Now more than ever I believe that the work requires total dedication.

I send a huge hug [to those who supported me], I’ve always said that in this type of situation those who most need support is the family and my elderly parents feel very very supported by everyone and this gave them tremendous strength.