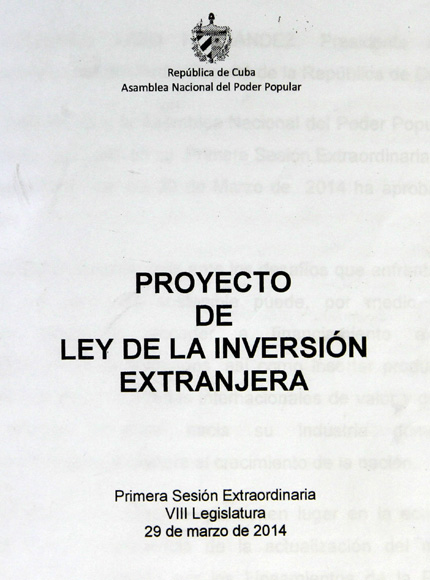 The National Assembly, Cuba’s parliament, easily approved (nothing odd for that body when the issue is something that, although not divinely ordained, “comes from above”) the new foreign investment law. One does not need a crystal ball to know that the new legislation — like the proverbial broom* — will sweep efficiently, basically for those in power and the barriers they have created.

The breathless financiers of the antiquated Cuban political model demonstrate that for la nomenklatura, the need of their wallets — or the need to upgrade,or air out, their state capitalism — is more important than to truly revive the the battered “socialist economy”.

As with all laws that “are to be (dis)respected” in post-1959 Cuba, it passed unanimously, i.e., everyone was in agreement — or at least, they all raised their hands — in that caricature of a senate composed almost entirely of members of the sole legal party in Cuba, which has been in power for 55 years and which, despite calling itself Communist, really isn’t.

It follows, therefore, to suggest to the Cuban authorities that to be consistent with their own laws, they should conduct an aggiornamento (update) of the philosophical foundations of their ideology, and of the historic government party.

The Cuban state has long had its eyes on foreign investors. Rodrigo Malmierca, minister of exterior commerce and foreign investment, stated several months ago in Brazil that Cuba will continue to have just one political party. He was, of course, speaking to the interests of Brazilian entrepreneurs, and emphasizing the message of confidence and stability that Cuba’s governing class wants to convey so as to encourage them to do business on the island.

This standard produces another discriminatory law that baits foreigners with financial benefits and tax breaks, in contrast to the prohibitive taxes imposed on Cuban nationals who launch themselves into the private sector. They took everything away from Cuban and foreign entrepreneurs when this model was imposed, and now they stimulate and favor only foreign capitalists to invest in our country. They say it’s not a giveaway, but any citizen of other provenance is placed above our own nationals, who once again are excluded from investing in the medium and large companies on their home soil.

Just as our Spanish forebears did, they engage in shameless and abusive marginalization of Cubans on their own turf, and restrict Cubans’ economic role in their own national home. The state continues holding “the master key” of the hiring process. It serves as the employment agency to calm the fears of its followers and urge them to continue their unconditional support, with the established and visible promise of compensation and privilege — albeit with a diminutive, revolutionary, symbolic and coveted “little slice” of the national pie.

On the other hand, the impunity that inheres to bureaucrats in management, along with the lack of respect toward Cuban society implied in their excessive secrecy, unbuttons the shirt of corruption.

Some of the many examples that strike a nerve among Cubans of diverse geographic areas are: What is the state of affairs of the country? What are the revenue and expenditures of different phases of the economy? Why do they not inform the public of the annual income generated from remittances by Cuban émigrés, and how these resources are used?

I could say and write much about the new law and the same old discrimination and practices contained in the same old legislation. As far as I am concerned, despite everything, the result is just another flea-bitten dog with a reversible — but no different — collar.

But that would be giving too much relevance to the segregationist, shoddy and desperate hunt for money by the elite in power, which needs ever more colossal sums of evil capital to “sustain” its unsustainable bureaucracy and inefficient model.

Anyway, this new law – like the proverbial broom – will always sweep clean for them. Considering their dynastic, highborn, 50-plus-year-old lifestyles, this seems to be all that matters to them.