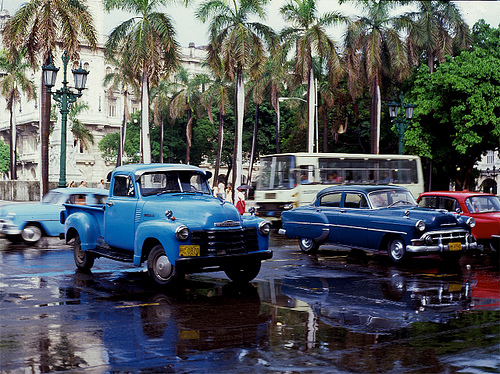 With money in hand, there’s something for every taste. A Chevy from the ’40’s or a well-kept ’54 Ford. A fin-tail Cadillac or a ’56 General Motors truck that looks like it just came from the factory. Cuba is the only country in the world in whose streets run thousands of American cars, jeeps, and trucks from the mid-twentieth century.

No doubt it’s the largest outdoor museum in existence for cars of that age. And because you can’t buy cars unless you have a state permit, in light of the poor state of public transportation, people with money have decided to buy a car manufactured in the workshops of Detroit several decades ago.

Jose Santiago, 42, calculator in hand, runs the numbers. He believes he will recoup his investment in seven years. Santiago wants to engage in the business of taxis for hire. It’s probably the only stable means of transportation on the island, although the government doesn’t sell so much as a screw to repair private cars.

In Cuba, buying and selling cars is only allowed for those owners who have a transfer certificate. So it is with the “big almonds”, as the old American cars are known on the island, because their owners bought them before the Castros came to power.

According to Roberto Diego, 34, it is common for a Chevrolet or a Ford to have had a dozen owners. Prices have gone through the roof. “In the ’80s, you could buy a ’57 Chevrolet for 3,000 pesos (when that amount was equivalent to 3,000 dollars, as the currency was illegal and the government swapped one for one with the dollar). Now, in 2010, it can cost 20,000 Cuban Convertible pesos (18,000 U.S. dollars), if it’s been kept like a jewel,” said Diego, who drives a Ford Austin from the ’40’s whose condition provokes envy.

Not that the drivers of the island are lovers of antique cars. They just have no other option. Luis Valle, 52, would prefer driving an Audi or a Cherokee “air-conditioned and with a computer, but I’m realistic; here, that’s impossible.”

State tourism agencies annually hold antique car parades, where you can see everything from a 1918 Ford, to rare versions of cars that had a limited production. On the interior streets bordering the steep steps of the National Capitol, dozens of old “jalopies” belonging to the Gran Caribe company are rented, for hard currency, to tourists who want to take a ride in an antique car through a city frozen in time.

For the ordinary citizen, when racing against the clock, the cheapest and fastest method is to take one of the “big almonds” that circulate on the various downtown streets of the capital. They charge 10 pesos, or 20 if the trip is longer. And they work four times better than the state-owned taxis, which have been missing in action for some time.

The ingenuity that keeps these cars running is worthy of admiration. General Motors engineering pales in comparison to the unique native solutions for the vintage cars. Without spare parts, and with a touch of fantasy, Cuban mechanics are able to keep these cars rolling.

Real monsters. Mechanical Frankensteins. With engines from Russian cars, transmissions from Spanish cars of the Franco era, and gear boxes from Italian Alfa Romeos from the ’70s. Their hard bodies, made from the abundant steel of World War II military equipment, have been painted and massaged numerous times.

Some are as beautiful as that of Javier Cueto, 65, owner of a 1958 Chevrolet, intact and without modification. “I’ve been offered 21,000 Cuban convertible pesos (19,000 U.S. dollars), but I pay no attention.” And he amiably shows the good conditions under which he keeps his car.

When you take an old taxi in the streets of Havana, the first thing the driver says is “please don’t slam the door.” While some cars have been rolling for nearly 70 years, faced with the uncertain future that is emerging in Cuba, the drivers of mid-twentieth-century American cars know they should continue taking care of them in detail. They may have to continue “boteando” (renting) them for a long time.

And if despair knocks on the door, it won’t be the first time that a Chevrolet is converted into a boat with an outboard motor. En route to Miami.