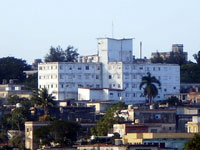 After it was closed on 2 August 2013, given the urgency to undertake discrete repairs on its constructive infrastructure, the Luis de la Puente National Center of Minimal Access Surgery (CNCMA), continues under repair today, obvious to the naked eye, and as usual, it’s the never-ending story.

In reality, given the rhythm established by the Cuban government on social issues and demands, I don’t see the hurry. Or you’ve forgotten the building in El Vedado in Havana on Linea and 12th streets, that only took 18 years to build, and today is a monument to bad taste. Let’s go, as the General said, slowly but surely.