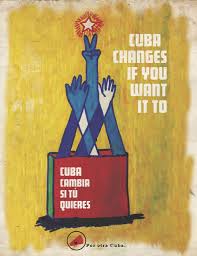 On 28 February 2008, the Havana regime signed, as a propaganda maneuver, the United Nations Covenants on Civil and Political Rights and on Economic, Social and Cultural Rights. At that time Raul Castro was seeking to legitimate his figure in the international arena and to project himself as a future option for the country.

Six years later, Raul Castro can no longer be taken as a reformist. He now sells himself as the person who can close a chapter in Cuba’s history, offering the international community and the country’s allies a supposed controlled transition and offering his heirs as the only option for “governability” and “stability.” However, the hereditary group represents only the extension of a decadent system plagued by corruption.

Backed by this logic, a new anti-embargo offensive is gaining traction. Several actors and influence groups in the United States are seeking a blank check for the ruling elite and their beneficiaries. Elite who bear the main responsibility for the national disaster and the systematic violation of fundamental rights and freedoms. The offensive is also passing through Europe and Latin America. In the latter case, the main chess piece is beginning to be Brazil, now that Venezuela, in its decline, ceases to be a partner that guarantees stability in the medium term.

However, the recent “desertions” of Cuban professionals from the Brazilian “More Doctors” program, and its possible legal consequences, are evidence that the Brazilian situation is very different from that of the “Bolivarian brother,” and that it could quickly become more complex than expected. Brazil, with its ambition to establish itself as a regional power, is focused on a much longer term scenario. In order to sustain and widen its business presence, it needs a smooth transition process on the island, resulting in at least a stable free market system and full reestablishment of relations between the government in Havana and the United States.

On the other hand, negotiations with the European Union on a bilateral accord are moving forward, although according to statements from representatives of the EU, we’re looking at a process that could take at least two years. Sadly, some of the countries involved have bought into the ideas of “governability” and “stability” mentioned above, in the short term. Ignoring the terrible consequences of supporting a system sustained by corruption and state violence. Others, however, continue to demand a focus on human rights as a minimum guarantee for an eventual accord.

Meanwhile, the regime is silent before the European proposal, choosing a surgical repression on the island to avoid widespread discontent beginning to capitalize on open demands to the system. Repressing against activists is increasing and promises to worsen as the scenario becomes more complex.

At the same time, the Cuban Catholic Church, after a pastoral letter where it seemed to shift its questionable performance, continues to maintain a complicit silence in the face of repression. Recently the editors of the magazine Lay Space, a Catholic platform, declared that respect for human rights should not be a condition for relations with Havana. Regrettable statements from an institution that should assume respect for human dignity as its principle premise. No one should forget that legitimacy within a society is not achieved spontaneously.

To promote the false hope that a regime like the current one will evolve naturally into a modern democracy is at the very least naive, especially if what is blindingly obvious in Cuba is the construction of an authoritarian capitalism, sustained by State violence, corruption and and political patronage. To freely award room to maneuver to those who know no respect or ethics and who immediately show their criminal profile, is a mistake.

At the recent summit of the Community of Latin American and Caribbean States (CELAC), one of the few statements that carried any weight was the request from United Nations Secretary General Ban Ki Moon that the Cuban regime ratify the UN Covenants. The campaign “For Another Cuba,” an initiative begun on the island almost two years ago, is working in this direction, looking not only for ratification but for implementation of these international covenants. In the context described above, it would give us a magnificent tool for the political game inside and outside the island.

Clearly the results still don’t reach the hoped for level, but the more than 4,000 signatures, the work of promoting and distributing the “Citizen Demand” inside the country, the request of Ban Ki Moon, as well at the possible bilateral accord proposed by the European Union, create an excellent environment to continue to focus on this campaign.

Cubans on island are fed up with a totally decadent regime, but they fear being the target of the excessive violence of the State and its paramilitary groups. The Covenants as a civic demand is a campaign that, precisely because it involves ordinary citizens, carries an implicit international legitimacy. The demand for these covenants also provides democratic and friendly governments a target for a direct and specific demand to the Havana regime. At the same time, implementation would serve as a road map to advance the process of democratization through changes in the whole constitutional and legal structure, pegged to the binding nature of such agreements.

To demand the ratification and implementation of the Covenants is an interesting tool that we have barely explored. The “For Another Cuba” campaign has borne only its initial fruits. Those who want to help democratic change in Cuba from abroad, should pay attention to this effort undertaken on the island and take a careful reading of the interior pulse, so as not to contribute to efforts that are fracturing and dismantling. If we want to be objective and work with real variables, without creating false expectations, we have to observe the tempos that, on the island, are marked not only by the opponents, but also by the citizens.