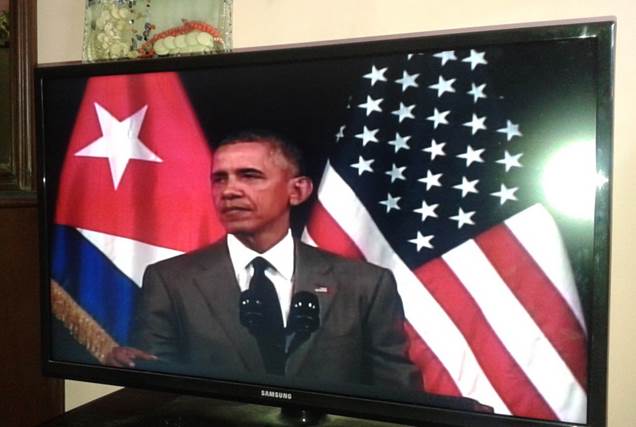 Rebeca Monzo, 24 March 2016 — No sooner had Air Force One taken off for Buenos Aires from Jose Marti International Airport in Havana with President Barack Obama, his family and entourage onboard than Cuban media began broadcasting distorted commentary by a twisted and pretentious Roundtable, which tried to undermine the excellent speech Obama had given at the Alicia Alonso Gran Teatro.

Terrified by the impact of the president’s words, which even in a specially chosen auditorium generated unauthorized applause, the local press began calling into question the spot-on and convincing arguments Obama put forth, especially those dealing with civil society. Among other trivialities, they claimed the president of the United States should have apologized to the people of Cuba for the victims of Barbados.*

Perhaps it is the Cuban government which should be apologizing to its own people for the religious and ideological persecutions we have suffered for decades. Or for the concentration camps run by the Military Units to Aid Production. Or for the victims of the sinking of the “March 13” tugboat in which three adolescents were shot and killed for trying to commandeer a launchboat without hurting anyone. Or for the thousands and thousands of people who have perished trying to cross the Florida Straits in rickety rafts, fleeing a regime responsible for unjust arrrests following the 2003 Black Spring and for weekly Sunday assaults on members of the Ladies in White.

Please, let’s turn the page, as President Obama asked Raul to do, and look towards the present and the future, not to the past. That is the only way to break out of the economic, political and social morass in which we have been stuck for more than half a century.

* Translator’s note: In 1976 a Cuban exile and former CIA agent planted a bomb aboard a civilian Cuban airliner, which blew up over Barbados, killing all seventy-three persons onboard.