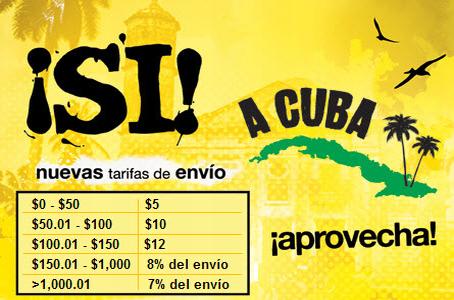 I am not going to tackle an everyday plot related to the cinemagraphic or literary genre that became one of the cardinal points of the United States, but that historic company that offers financial and commercial services, Western Union.

Until sometime more than three months ago, if some friend or relative abroad advised by phone that he was planning to send “a little help” by that means to a Cuban inside, those here had the possibility of calling one of the offices of Western and giving his name or that of the sender in order to see if the deposit was already posted and to go and cash it. Since the beginning of July you have to have the transfer number to receive the money, and if not they “give you pumpkins” — that is, they dismiss you — by telephone or personally, although you have the documents and identification that prove that you are the beneficiary.

I’m bothered by the suspicion that that measure is the result of joint management of those that work at the Western Union offices in the Cuban capital — almost always a female — because all those I know are embedded in dollarized businesses and “it is established” that the employees of those offices work simultaneously in the store.  As is natural, it is more stimulating for them and economically convenient for those of Western Union to work with those who are going to spend at the store, than with those who come to their offices to get cash and who know through their relatives how much it cost them to send the shipment.

Some days ago I went to the Casino Deportive internet navigation room or “cyber-without-cafe” in order to send an email and there I found myself with an old woman who asked me for help.  Information technology has still not reached her understanding and her arthritic fingers and she did not know how to create an email account so that her daughter who lives abroad and financially subsidizes her can send her the transfer number.  I wrote her user name and password on a piece of paper for her and she left very grateful, but it left me with doubt whether the next time she will find someone else prepared to leave aside their communication management in order to help her computationally.

What will the old people, whose relatives are accustomed to sending them a regular remittance from abroad, do now?  (In socialist and contemporary Cuba saying “remittance from abroad” is almost a redundancy).  Without doubt, the benefactor will have to call, with the consequent telephone charge in order to give the number of the financial transaction so that the favored one might receive it.  And what about the old people that suffer advanced cataracts, glaucoma, Parkinson’s disease or some other degenerative illness that impedes them from doing it?  And the visually impaired?  With so few computers with internet access in Cuba, that measure against a part of the population is such a great abuse that it verges on contempt.

It seems that when the money already makes up part of the government’s coffers, no one worries about the fate that befalls its intended recipients, if it is in the only hands that really interest the Cuban state: its own.