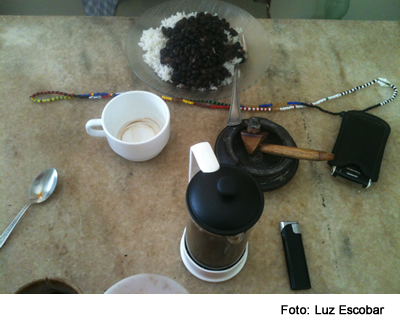 The lady counts the coins before leaving home: she has fifty-five cents in convertible pesos. It is the equivalent of a full day’s pay and barely fills a corner of her pocket. She already knows what she is going to buy… the same as always. She has enough for two chicken bouillon cubes and a bar of bath soap. So eight hours work is just enough to flavor some rice and work up a few suds in the bathroom. She belongs to that Cuba that still calculates every price in national currency — the Cuban peso — a part of the country that doesn’t receive remittances, has no special privileges, no family abroad, no private businesses, nothing going on under the table.

Just before arriving at the store to buy her Maggi cubes, she stops to stare at those drinking beer at a snack bar. Every can of this refreshing drink is the equivalent of two days’ pay. However the place is full, packed with couples and groups of men who talk loudly, drink, try some of the food. It is the other Cuba, with hard currency, with relatives abroad, with their own businesses or some other illicit source of income. The abyss between the two is so great, the divide so major, they seem to be running in parallel, never touching. They have their own fears, different dreams.

When the beginning of a timeline to eradicate the dual currency was announced this week, the two countries that converge on this Island reacted differently. The Cuba that lives only on its miserable wages felt that finally they had started to put an end date to an injustice. They are those who cannot even have a photo taken on their birthday, pay for a collective taxi, nor imagine themselves traveling anywhere. For them, any process of unifying the currencies can only bring hope, because it couldn’t be any worse than it is now. The other country, in convertible pesos, received the news with great caution. How will the exchange rate change relative to the dollar or the euro? How much will the buying power of those who live better today be devalued? Their thoughts were pragmatic.

In a society where the social abyss is increasingly unfathomable and economic inequalities grow, no measure helps everybody, no relaxation will make life better for each person. Twenty years of monetary schizophrenia have also created two hemispheres, two worlds. It remains to be seen whether a simple change of banknotes can bring closer these two countries that comprise our reality, these two dimensions. If it can make it so that the lady who — almost always — eats rice flavored with a little soup cube, can one day sit down in a snack bar and order a beer.