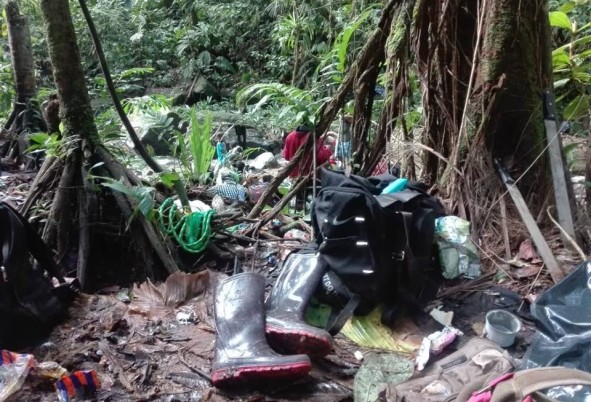 Jeovany Jimenez Vega, 17 June 2019 — Several weeks ago we received the news of the tragedy of the Armila River, in shock. On the night of April 23rd, dozens of Cuban families were mourning when more than fifty young people, who traveled north into Panamanian jungle, died dragged by a sudden flood.

Despite its obvious dramatic and seriousness of the news, it found, however, relatively little exposure on international mainstream media and Internet sites, which clearly shows, why Cuban matter can be considered more profound and harder to solve, than other Regional conflicts now in the spotlight -meaning- Venezuela and Nicaragua unfortunate situation of  under their respective dictatorships.

Perhaps if these deaths had occurred among young people from these two countries (Venezuela and Nicaragua), the tragedy would have had a greater impact; but when the news is about Cubans fleeing from Castro regime, relevance is reduced because more than half a century of dictatorship always have its toll of attrition. It appears today that the loss of our emigrants retains all its tragical nuances only if it is suffered within a Cuban home from the perspective of the father in despair or an orphan child.

Cuban authorities, of course, looked the other way. In its cynical logic, this Panama doesn’t seems the same that a loud  psychologist -from the UJC (Cuban Youth Union)-traveled to, with her humble  salary,  to boycott the 2015 Summit: for the dictatorship she is regarded as a model citizen and these (deceased Cubans) are nothing but dead maggots. [The name given by Castro regime to anyone willing to leave the island seeking freedom.]

In contrast to this new Castro regime massacre a few days ago, a “new official position” emerged: the elite of the “Revolution Square” recently made it clear to Cuban diaspora, that in their “draconian” Law of Foreign Investment 118, in effect since March 2014, it actually does not exclude Cubans from being able to invest in their own country, however, holding eager ones back, reminds them, this offer is only  for those whose net worth and residence are stablished abroad.

Needless to say, such a statement, excludes a private sector that struggles to survive in the Island, in spite of all obstacles imposed by a dull system, obsessed in demonstrating that “the anticipated bright future” is incubated in its state own socialist enterprise.

These two -apparently unrelated- news show the complexity of a failed society whose dictatorship not only coax civil and political liberties of my people, but as collateral, grabs with an iron hand their economic rights aswell.

Even so, in recent years, the increased tendency of some Cubans whom after residing for several years abroad -oblivious of reality in the island and having neglected their citizenship- has now returning to reside  in Cuba for good, through an insulting process called “repatriation”, humiliating euphemism given by the same (officials) who have deprived them of their right to travel and return freely, as if Homeland belonged to a few (in power) and not all of us instead.

Personally, I cannot understand under which mysterious reasoning, those who one day emigrated, stung by dreams of prosperity and from a complete certainty that they would never achieve it under a totalitarian police regime, come to conclusion, that only because they return with a few saved dollars  – even thousands, or tens of thousands or hundreds of thousands, in this case the amount is not relevant – today they will have more guarantees of success.

The naive ones must be aware of a bunch of snitches, there are still around each block (in the neighborhood), either by twisted conviction or primitive envy, they will inform about their every move, the moment they (private entrepreneurs) start a small business. Today the “juggling” needed to get goods in the Cuban (domestic) market, whether formal or informal, would make “Cirque du Soleil Stars” look like rookies; besides “an army” of crooked state inspectors and corrupted police officers -awaits in their neighborhood- “sharpening their teeth” to extort them; that there is no humane way to run a business in Cuba legally, because the very law that rules businesses is exquisitely designed to prevent it, and everything will have to occur “as illegally and secretly” as when they left, a case among many, in the exodus of 1994.

It is true, that everyone knows their own “Maleconazo” (1994 riot) and everyone understands their own reasons, but nobody should be so naive, assuming a false distension of the authorities after “the mirage of the Obama era”, because -sooner than later- they will collide with a reality as suffocating as the one that made them flee before. To expect something different would be like “building castles in the air”.

And it’s not about Trump’s strengthening US positions,  no; but Cuba remaining static because the dictatorship of Fidel and Raúl Castro – now with the new administrator Díaz-Canel at the threshold of the door, with the same Masters – remaining entrenched at the same position and betting on poverty for my people as a strategic weapon of control in order to stay in power.

Probably, at this moment, many returnees  regret the possibility of reversing the film, and have come to the conclusion that under such circumstances, it is not enough to own the capital, but rather to live ruled by institutions that protect and stimulate with sincere enthusiasm, producers  and small enterprises – contradicted reason  to major investors desperately needed in  today’s Cuba.

Whoever studies this Foreign Investment Law will advise that, it does not even wink at emigration, that it does not even imply any priority or preferred treatment, as anyone would expect. Rather, owners of the slum “place excuses beforehand” and clarify that everything will be on equal terms: in our case, the State Employer Company will also  mediate to pocket 90% of our wages; Cuban authorities will designate, with no exception, each operator and engineer within these companies – among which the State Security will infiltrate their henchmen – and will keep 60% of all benefits.

Such carelessness raises such unfair rules of the game, that so far no one bites the hook, and Mariel’s Special Development Zone sits idle and dusty as a witness – a project that so far has attracted only 15% of investments and profits expected by   Castro regime.

Then the question that follows: Why if the Foreign Investment Law has failed to appeal the rest of the world, it would appeal to Cuban Diaspora that knows the bird by its color? What make clown Bruno Parrilla, chameleon Malmierca, pub  administrator Diaz-Canel, and their boss, Raúl Castro, think, that emigrants will fall for a scheme they know better than anyone else?

Why would exiled Cuban entrepreneurs take chances under current circumstances, knowing that all profits will go directly to finance repressive forces of regime? Why is it, our fellow emigrant choose to pay $10,000 to traffickers on the Straits of Florida or Central America, and does not even consider investing his own country? Why do their relatives in Miami  follow the same reasoning and support them?

Would third world emigrants -who take up the same coyote route- take chances on a  reckless venture should they had $10,000 to finance a family business? What powerful reason convinces Cubans that no capital is worth in this broke Cuba that flee from out of despair? How to understand that in recent years Cubans took more than 2.3 billion dollars annually out of the country to buy abroad to supply the black market –figures coincidentally similar to the 2.5 billion annually that experts set as a goal for the Foreign investment that Cuba needs to get out of this predicament? The similarity of these figures denounces the scale of the absurd.

All of this, must be taken into account by Cuban emigrants when planning on coming back. Should that effort is fueled by nostalgia of those little details and simply prefer to keep those many things that cuddle their romantic heart, oh well, “go for it”, !A natural desire of returning to the womb and your home, no matter how distorted our reality is, but you should never be so naive to set sail on a return trip assuming that something has changed in Cuba: you must be certain that in the meadows of your childhood today, you will find burnt land, and a country that in many respects it resemblance the darkest phase of the “special period” (worst crisis of the 90s).

Future returnees must be aware they return to a harsh battlefield. There are  more than fifty Cuban corpses that have been swallowed by the Darien jungle to prove it, as a clear warning. Meanwhile dictatorship ensures nothing happens, that tenseness will be a matter of a few months, that we should not fear hunger since chubby generals will guarantee everyone “Hutia meat and Ostrich milk”, that there is nothing to worry about or bringing ghosts from the past, because the “special period” was already buried thanks to the brilliant directives left by the enlightened Fidel Castro.

And to top it off now they tell us that emigrants can invest in Cuba, which should only be taken as proof of despair, coming from a regime that will never cease to despise us. The one thing despots do not tell is that once their money has been invested, their business has failed and their assets confiscated, returnees will face the only two choices left: either they end up in prison or try ,desperately,  the same route back again through Darién jungle. Luckily, we are certain, or hopeful, that “Liborio” might be poor, but his not a fool.