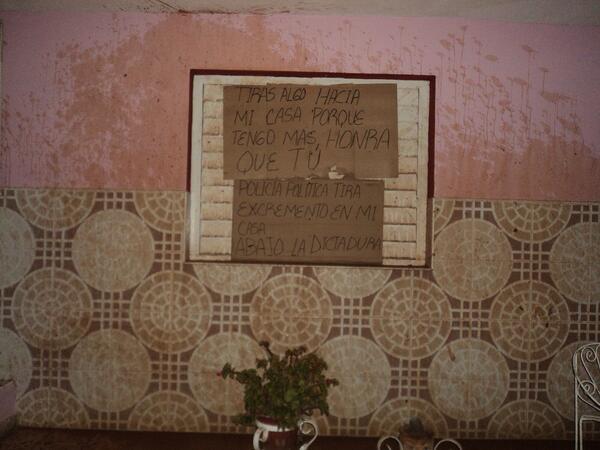 Signs: Throw something at my house because I have more honor than you. Political officer throws excrement at my house under the dictatorship
This appeared on the house of Caridad Burunate after being pelted with eggs by a mob.

“On October 4, they had me in a choke hold, it was the Special Brigade.  There were men, I was talking to one of the big men, they took me to the door of the house, inside the house.  They came with their uniforms.  Some men dressed in overalls painted the house in asphalt, five times they have done it, without taking into account that there are minors here,” that is the testimony of Damaris Moya Portieles, President of the Central Opposition Coalition, resident of Santa Clara.

Violence against women, dressed in white or not; with or without gladioli in hand has become recurrent all over the island.  It has to do not only with the hate sessions like the Acts of Repudiation, the physical mistreatment and the torture are “a piece of cake” in the containment measures against the opposition.  Damaris herself relates:  ”Some months ago I was admitted into the Arnaldo Milian Castro hospital, the result of a beating that the State Security officers dealt me,” she says, and offers the name of the oppressors:  ”Yuniel Monteagudo Reina, Erik Francis Aquino Yera and Ayor vigil Alvares, plus Pablo Echemendia Pineda,” she concludes.

Fourteen Sundays Under Rocks and Words

She is a hardworking woman and always likes to prepare the best dishes for her family; one day she decided to do it for the poor.  Caridad Burunate hosts each week in her home some twenty elderly and destitute people to give them a little ration of food.  She does it under the project “Capitan Tondique,” and the name of the anti-Castro guerrilla fighter has cost Burunate, in Colon, Matanzas, the well-known acts of repudiation, beatings, arrests and the painting of her house black.

“The mobs prepare, they are criminals, and they cuff us, fight us.  Even prisoners have been brought from the Aguica prison, because they tell them that they are going to give them passes, they even kick us.  When we arrive at my house from the walks (every Sunday with the Women in White), they wait for us with bags of rocks, eggs, they even painted my house because they wrote, “Long live Fidel, Long live the Revolution” and I wrote to them on top of that:  ”Down with the Revolution” and “Down with Fidel.”

The president of the People’s Power, Dignora Zenea Sotolongo, brought a jeep full of eggs, which are non-existent, people do not have them to eat, and they threw them at my house; and of course, she has almost all her family in Miami.  This house they bathed in eggs and asphalt.  They give eggs to children for them to throw.  I made myself an opponent because we have no rights, and because I have always enjoyed expressing what I feel, I did not do it just for myself, but also to help others,” she concludes.

Tania Oliva Chacon resides in Palma Soriano, Santiago de Cuba.  She received the first beating “in March of this year,” when she joined the Ladies in White.  ”On October 10 I found myself at a friend’s house and we were about to watch the class they broadcast on TV every day, but the house was surrounded since early morning, and when we were about to sing the national anthem, they threw themselves on us like beasts, like animals.

They knocked me down with a kick to the leg, and injured me.  They immobilized me for 21 days, but I had no way to heal.  The one who kicked me is Captain Arsenio, the chief of the sector Police.  One of my companions was badly hurt, they got him in the ribs and he is still in a very bad way.  On many occasions they come dressed as special troops in order to impress us.  I was in my last year of studies for a Bachelor’s in History, but as I began to demonstrate and to tell about the thefts that were happening, then I “fell ill” and could not finish.  My son has graduated and has not been able to get a job,” she said.