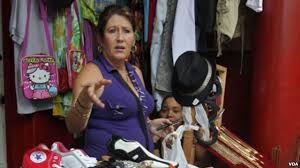 Havana, Cuba, November 2014.  Since the past month the majority of the “Hangers” (points of sale) and rented places in the capital for the sale of clothes have put up signs announcing liquidation sales.

After three years of tolerance, the sale of imported clothes is coming to an end. Passing cuisine, clothing sales is the area where Cubans invested more of their money since Raul Castro announced the new political economy.

In early 2012, the government dealt the first blow to the sale of clothes. They imposed on residents of the island a requirement to pay the customs duties for the import of non-commercial goods in dollars.

Cubans involved in the business struggled with flea market prices in Mexico, Miami, Panama, Peru and Ecuador. They paid the customs demands and the “Hangers” spread throughout the island. The most incredulous opened caricatures of Boutiques or repaired places abandoned by the government in order to rent them.

When appearances indicated government consent with the people’s prosperity, another blow stabbed the self-employed to death.

The Executive Committee of the Council of Ministers set January 2014 as the effective date for the suspension of sales of manufactured clothing under licenses issued for “dressmaking” or “tailoring.”

According to a note in the newspaper Granma, issued last Saturday, the prohibition is based on “the need for corrections to combat impunity, enforce the law and protect self-employed workers.”

Magdalena Carrero, 47, works as a saleswoman at the fair located on Galeano at the corner of Barcelona in Central Havana. The woman approached me while I was interviewing other sellers and asked me to publish a question to the government.

“What are they going to do with all of us left without work?”

She has two children, 7 and 22. She’s had a better standard of living since she started working in the “Hangers.” Her testimony about better salaries in the private sector coincides with what the other vendors say.

Each of them earns more than 500 pesos ($20)* monthly as a contracted salesperson for the owner or proprietor of the “Hangers.”

Maura Estela, owner of the “Hangers” on Galeano Avenue and her employees also disagree with the ban.

“We have no one to defend our rights… the CTC (Cuban Workers Center) holds a lot of congresses but no one represents us,” declares Maura.

The workers in these places note that the measure will leave a lot of people unemployed. One of them who asked not to be identified said that this kind of work attracted young unemployed people prone to crime.

“Clothing attracts youth… Look how many young people sell here, people who don’t meet the requirements to work in the government stores,” she explains.

The clothing vendors consider that their offers and prices are better than the government’s.  Despite the questionably quality of the merchandise, the island has been able to keep up with international fashions for more than a decade.

“They (the government) don’t have what we offer, neither the quality nor the price,” affirms Maura Estela.

“Selling clothing made in Cuba is impossible, we don’t have resources… They can’t even manage the production of school uniforms… Let Murilla show up with underpants made in Cuba and explain why he wears a Rolex,” she added. 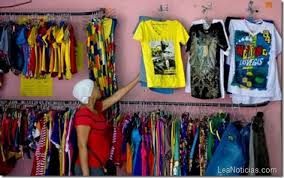 In the Central Havana Municipal Labor Office we talked to an official of the sub-branch. The attorney declared that she was not authorized to offer figures about the “Seamstress and Tailor” licenses or forecast data on the unemployment that will be caused by the ban.

The owners of the “Hangers” pay around 960 Cuban pesos (40 dollars) monthly to the government for the space, social security, workers employment plus 10% of monthly earnings. The salaries of the workers ranges between 500 and 1200 Cuban pesos a month.

Owners and workers agree that raising the taxes would be less unpopular. All of them worked, in recent months, with the hopes that the concept of the “Seamstress and tailor” license would be changed to allow the sales.

More than a few are prepared to challenge the ban

“If they prohibit the sale of clothing, I’ll go underground like before. Hidden in the stairwell of my home,” she says.

She confesses to having sold clothes illegally before the government tolerated the “Hangers.”

“I spent years juggling the sector head and the inspectors… at that time I earned more,” she says.

A license holder on Carlos III Avenue in the same municipality, who preferred not to be named “to avoid problems,” declared his intention to abandon the business.

She was fined when she sold from a “key” (underground store) and they confiscated her merchandise.

“In this country it’s impossible to lift your head, I’m leaving when I sell everything” she says.

Another owner of a shop located at Industria and Barcelona streets who also declined to give his name, said, “I’d rather they charged us for the license in dollars.”

He and his wife rented the room of a house where they sold clothes they themselves imported. He said they have all their money invested in a “Hanger” and added, “It’s impossible to sell all the clothes before January. We can deal with whatever measures to regulate this kind of work, but to prohibit it is to throw us out in the street, force us into the black market.”

*Translator’s note: $20 a month is higher than the average wage in Cuba.