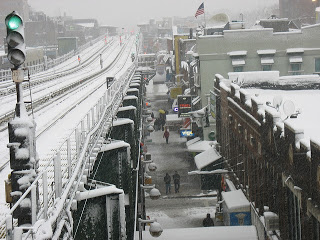 The bang-bang of the trains is permanent on Roosevelt Avenue. Our little house in Queens trembles, refuge of Cuban immigrants, patriot performance of the passports with which Raul Castro has blessed us, with pretensions of State-God.

As there are electric trains, as New York is an electric city, when they pass (and the trains always pass), it sets off the AT&T phones, such that not only for the noise is it impossible to speak. Much less is it conceivable to communicate with Cuba, where I left my elderly mother and my young love.

None of this happens in the United States, of course. Cuba reproduces like a cancer in our heads. Months ago I couldn’t express myself in English, except in some chats I’ve given in universities. The set continues to be Queens and then Brooklyn and then Manhattan, but the United States is what we’ve all left back there: in Cuba, it’s understood, in our enthusiasm to leap over decades of sub-socialism and finally escape.

This little area of Queens is the most atrocious neighborhood of Latin America. Low prices, nocturnal screaming, rude looks, pre-literate Chinese, railway accidents, oily smells, Dominican-New-Yorkers, police who ask for drivers’ licenses (I haven’t seen this done since Cuba), enigmatic medieval little castles, Japanese teenagers with their on-line iPads, wholesale freedom, cats (copulating and fighting off-stage, what a marvel), Old Coronabana bookstores, cold mornings in May, earplugs to avoid nervous breakdowns from the bang-bang, Mexican housewives running errands decked out with rapper jewelry, and keychains that screech louder than the elevated subways of this city.

We Cubans without Cuba are the spontaneous equilibrium. The faithful of a great nation.

I brush my teeth. Here nothing tastes of anything. Not the pasta, not the apples. But I brush my teeth with a spring-like delight, almost for the first time.

I spend the 24 hours of the world hooked to wi-fi, I recover the visibility of the planet with simple click-click (this is the country of onomatopoeia and acronyms), I think of my homeless future, for now I choose a tentative stairway where I sleep without my laptop being stolen. Because I think, also, in the Cuban novel I’m going to exterminate myself here, and in one of these corners, in absolute poverty, surely a little sick, my useless genius despised by the triumphant Cubans (that pragmatic pandemic), spitting and spit up until the for the last of my compatriots, looking over their shoulders for God’s spokesmen on the island (here) as in exile (there), abandoned (as it is only right that they abandon me) by elderly mother and my young love.

I never eat breakfast, I never eat lunch. I wait with more or less luck for your invitation to dinner. I try to save money. I don’t spend anything. It’s entertaining to see how long I will hold out.

The mistakes and the pressures begin. The threads of the labyrinth are cut. Nobody wants me back in Cuba, that foreign country where I wouldn’t have a passport or a penny (now I say “céntimo, not “quilo,” and this relocation is beautiful).

While typing in secret, to the rhythm of the bang-bang, I myself become a train. Meanwhile I tweet my quick blasts and some column or another so it seems I survived. It’s not true. I already took off. The midnight sun waits for me along with that long polar night I dreamed of in my boyhood dreams (I think when I was a boy, I was really a girl). A solitary night of shadows to the horizon, eternal and exceptional, in which I will enter without footsteps because I aspire to never have to return.