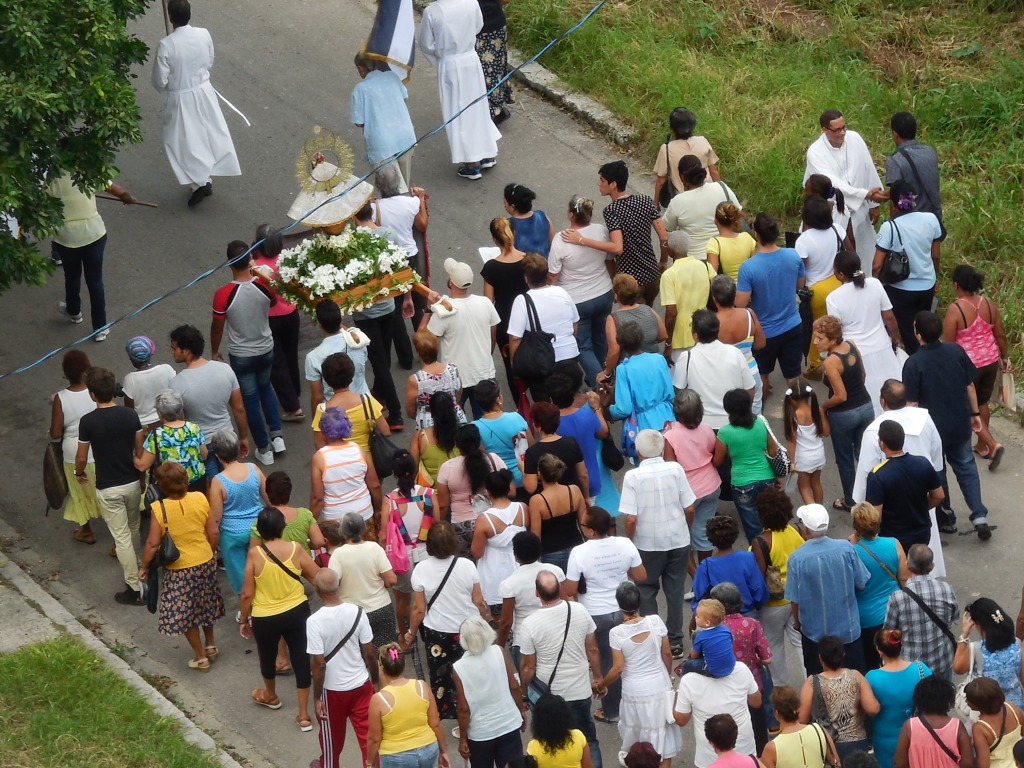 Lilianne Ruiz, Havana, 9 September 2016 — The processions of the Virgin of Charity, Patroness of Cuba, which took place yesterday, September 8, on the island, made me recall with nostalgia the subject of this article, Pope John Paul II.

Back in the ’60s of the last century, the then auxiliary bishop of Krakow, Karol Wojtyla was an activist for the right of the inhabitants of the new workers’ city of Nowa Huta, built on the outskirts of Krakow, to have a church consecrated to the Queen of Poland, Mary, Mother of God, under the patronage of the Black Madonna of Czestochowa.

Therefore, the future Pope of the Christian millennium celebrated a Midnight Mass in the open, more precisely in a frozen field, because of all the years the communist government of Poland refused to authorize the construction of a temple. In 1977 the new church was finally ready, having taken ten years to build.

After celebrating the consecration ceremony, Wojtyla, at that time the metropolitan archbishop, defender civitatis as tradition recognizes the Bishop of Krakow, gave a different sermon, as a “voice crying in the wilderness.” He said:

“This city is not a city of people who belong to no one. Of people to whom they can do what they want, who can be manipulated according to the laws or rules of production and consumption . . . We hope that in our country, with such a Christian and humanitarian past, these two orders — The Light and The Word of God, and respect for human rights — will join in a more effective way in the future.”

Years later, when he came to be pope, he would lead a spiritual and cultural crusade against totalitarianism; which was one determining factor in the 1989 liberalizations throughout Eastern Europe, establishing a new democratic order. While Reagan and Gorbachev played a historic role in the nonviolent revolution, John Paul II was the spiritual force that fatally wounded communism.

We Cubans currently ignore “where the shots come from,” of Pope Francis. The only thing that could excuse him for appearing so lukewarm when it is time to issue a condemnation of the way of life under socialism-communism, is the fact that he himself has never lived under similar conditions.

Life under such a political and economic model becomes miserable both in terms of goods as well as in aspirations and opportunities. Not, as the official propaganda tries to sell us, because of the US economic embargo or as a result of mistakes in economic plans, whose very existence violates fundamental freedoms, rather the scarcity of consumer goods and of opportunities for the individual to develop his or her own life project are the essential principle of the operation of the system.

Needless to say the socialist-communist state bases its stability on the elimination of any attempt at mobilization and political dissent; and not, as those who haven’t taken the trouble to reflect on it believe, on the ideological formula that tries to legitimate it in public opinion.

It is contradictory to listen to the Holy Father — from Krakow! — tell young Cubans “Don’t be afraid,” just when the ecclesiastical authorities on the island seem to limit themselves out of fear of political reprisals by the Cuban government, which have already been notable.

The antiquated government discourse of the right of sovereignty and nationalism as an ideological justification for the unlimited violations and damages that a discretionary and arbitrary power inflicts on individuals, on behalf of “social justice,” is a fraud consistent with the group in power determining what the needs are and distributing the satisfactions of these needs to entitled members of society, completely misrepresenting the needs of the human condition and its aspirations; in fact, it can only be countered by a strong speech in defense of human rights, by those who have the authority to make themselves heard.

Especially because the dignity of the human person promoting Catholicism only becomes meaningful when states show respect for those rights. The violation of which is what qualifies totalitarians as anti-humanists, the biblical antichrist, specifically because they deprive human beings of the consciousness of their individual moral responsibility, inalienable like their freedom.

In response to the question of what should be the current policy of the Vatican with respect to Cuba, the answer seems to refer more to the Ostpolitik of the Holy See than to the extraordinary legacy of John Paul II.

This Ostpolitik led in its day to Pope John XXIII, author of the encyclical Pacem in Terris (Peace on Earth) delivered in reference to the nuclear crisis triggered by the installation of Soviet missiles in our country, and it reminds us that in calling the Second Vatican Council he was inspired by the maxim “save what can be saved” as a reaction to the policy of communist governments to try to stifle religious life to the point of extinction

It was the Secretary of State of the Holy See, Agostino Casaroli, who was charged with developing the Ostpolitik in relation to the countries of the Iron Curtain. But that policy would have defrauded the liberalizing yearnings of millions of human beings, victims of totalitarianism. John Paul II, unlike Casaroli, condemned such a political model under the human faculty of discernment between good and evil.

Most alarming in all this would be to conclude that the Polish Pope has been an exception to the rule, or that the current pontiff is more empathetic, due to his Argentine origin, with the “liberation theology” of an anti-liberal and leftist trend, and is trying to interpret the concept of the Kingdom of God on earth expressed in state interventionism as a disciplinary power applied to society, to “eradicate social injustice, the gap between rich and poor.”

Either way, the question arises to which we Cubans still have no answer: Can the Catholic Church be at peace with communism simply because of the fact that it is not presented as atheism?

Like conquering the world, whatever politics says, in the dreams of Cubans the Virgin of Charity is present. But not like the one of the processions, so cold and distant, so like a superstition; but the living one, the Mother of God, custodian of the name of every Cuban physically and spiritually violated on the stocks of the Political Police’s repression, those who serve the masters of the only party.

The Virgin, also called mambisa — female freedom fighter — protector of Cubans in the sea of the Florida Straits, companion of the deceased to that other dimension where there will be no weeping, to her we Cubans pray. And for the return of the democratizing wave, of the unforgettable Pope John Paul II.