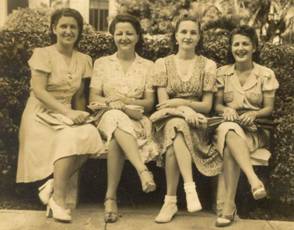 University students of the ’30’s.

Much is said and published through the media in our country about the “achievements” obtained for the Cuban woman after the Revolution. But never is a word said about the social, political, and economic advantages achieved by our feminine population before the year 1959 in the last century.

For that we are going to refer to some very revealing information from the “1953 Population and Electoral Census,” the last one carried out during the Republic, published and edited by P. Fernández y Cía.  These censuses were carried out approximately every ten years.

As interesting information we can say that in the year 1940 everyone who involved in the teaching profession was certified, a unique condition among all the countries of Latin America.

In addition, we can point out that Cuba in 1918 became the first country in Latin America to recognize the right of couples in conflict to divorce.  We must also add that in the Constitution of 1940 is recognized, for the first time in Latin America, a woman’s right to vote, equality of the sexes, the right of a woman to work, the right to open a bank account, and to get a passport, besides granting her authority over her children.

Of the economically active population in 1953, 22% were female, in addition to a work force in professional fields where 16% were women and 3% men.

As can clearly be seen in these statistics, women’s participation was increasingly present.

For this it is good to note that in the same way that the participation of the “weaker sex” was becoming more active in the life of the country, they were implementing home courier services such as the delivery of milk, bread, mineral water, food, pharmaceutical products, dry cleaning, laundry, etc., which relieved the woman extraordinarily in her domestic work, enabling her to dedicate more time to the attention of the home and the education of her children.

I believe, without fear of equivocation, that we can assure that already the Cuban woman had become liberated in the Republican era, and her equality of civil, social, political and employment rights was on the rise.