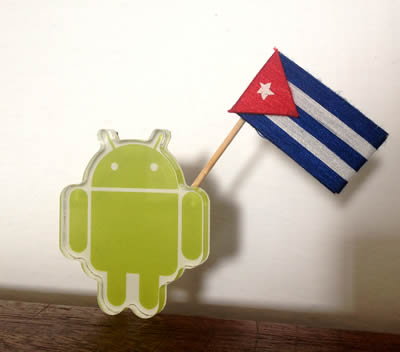 There’s a green robot with antennae everywhere you look. In the mobile phone repairers’ ads, on certain nice T-shirts, and even staring at us from the windshields of some cars.

Not only does the Android app show up in many places in Cuba, the Google operating system has also grown in popularity over the last year. The creature based on Linux lives in a good share of the smartphones entering the country, legally or illegally.

If we take a look at what’s inside these Smartphones, we note the prevalence of applications that work off-line. Local users prefer those that work without access to the Internet, to ease the limitations of living on the “Island of the disconnected.”

There is a great demand for maps throughout the country, encyclopedias with images, translators into various languages, role-play games and tools for everyday life.

After inquiring among several users and cellphone repairers, I can offer a list of the ten most popular Android applications in Cuba.

WikiDroyd: A version of the well-known interactive encyclopedia Wikipedia, which includes not only the texts but the images. It works without an Internet connection, although it must be downloaded to the phone’s database. If you just ask the technician, it will include the version most used in Spanish with almost two gigabytes of data.

EtecsaDroyd: A pirated copy of the telephone directory from the Cuban phone company ETECSA. It has the complete name, identity card number, and even the home address of each subscriber. Although this information should be protected and not for public use, every year it’s leaked and ends up on the computers and phones of thousands of people. One more example of the many prohibited things that so many Cubans do.

WiFi Hacker: A tool for hacking WiFi networks and getting free access to the web. It may seem somewhat useless in a country where there are few wireless connections to the Internet… but you never know.

Revolico: An unauthorized version of the ad site Revolico.com. With a simple interface, this app lets you download the ads for buying and selling things in different categories. It has spread rapidly, given the growing illegal or alternative market versus the extremely expensive and poorly stocked State markets.

Go SMS Pro: A magnificent messaging utility to send SMS and MMS text messages. Much better than the native Android application for this use. Clear background, multiple themes to change the graphic interface, spell-checker and even a nice pop-up configuration that alerts you to new messages coming in.

ASTRO File manager: Lets you manage the files on a cellphone or tablet. For those who like to search in folders or directories, this applications helps with that task. Delete, copy, rename and find files, all with just a few clicks.

Photo Studio: Crop a photo, apply a nice color filter to it, or simply retouch it, it’s never been so easy. You have the option of taking a high-definition photo and reducing it to a size you can send by text MMS (Multimedia Messaging System), which in Cuban only accepts images of about 300 kilobytes.

OfficeSuite Pro: For those who take their office with them everywhere this is a magnificent tool to write, make notes and jot down ideas that come to mind in the most amazing places. It allows you also to create and read files in Excel, PowerPoint and Adobe Reader.

Linterna (Flashlight): In dark theaters where there are no ushers or on unlit stairs, this simple flashlight will save you from tripping. With features like this we see that a phone can also work in a very simple but essential way.

OsmAnd: This is one of a series of very valuable applications that offer offline maps. Others include OruxMaps, City Maps 2Go, MapDroyd and Soviet Military Pro. Although GPS satellite service is not available, a pretty good geo-locating function works through triangulating off cellphone towers. It includes really detailed street maps of the principal Cuban streets, but in rural areas the road descriptions are not as accurate. In a country with badly signed roads and streets… this tool is almost a miracle. 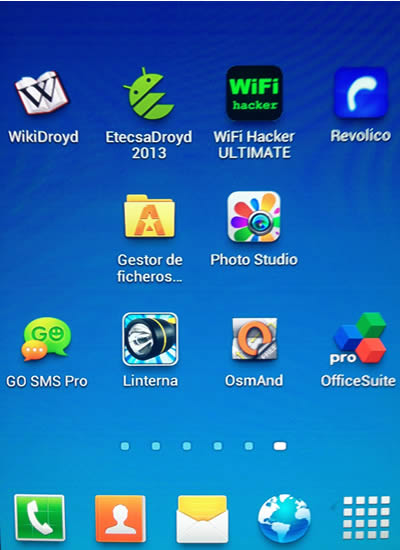