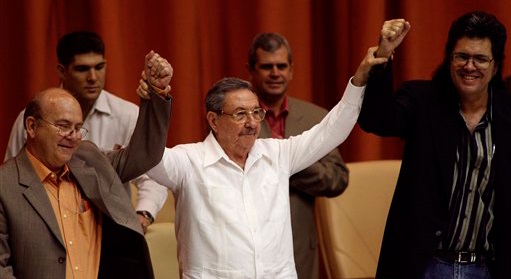 After reading “The ’correct’ intellectual of the Revolution” last December 20, by the independent journalist and human rights activists, Roberto Jesús Quiñones Haces,making a tour of the silence of UNEAC (Cuban Writers and Artists Union), which makes it complicit with the dictatorship, the saddest thing is that the majority of its officials who run it, were persecuted, humiliated, censored, and today, although it’s impossible to forget, they pretend that they do, and publicly support the arbitrariness and injustices of the government, the same ones committed against them, with the difference that they think that today they are not the ones who are going to pay with their skins, so they don’t alarm themselves.

In the small circle of injustices that were committed against me on October 30, 2012, at the rigged trial in the First Chamber of the State Security, at their special site at Carmen and Juan Delgado, in Vibora, Miguel Barnet, current president of UNEAC, sent to the lawyer of the artistic institution and “NGO”, and the official and poet Alex Pausides, to attend as witnesses. I couldn’t hide my surprise at his presence on behalf of Barnet. The lawyer and the poet, later at the hearing, leaving the court and in front of family, saying that I could never be condemned because there wasn’t the slightest evidence against me, on the contrary, they had presented five witnesses in my favor, meanwhile the “plaintiff” fell into contradictions and gaps. They were convinced I would not be sentenced.

Then came November 8th, a week after the hearing and I was awaiting sentencing, we protested in front of the Acosta police station, demanding the release of Antonio Rodiles and several opposition attorneys, who had been arbitrarily arrested.

We were savagely repressed by the henchmen in service to the dictatorship. The beating was captured on a video that made it to the Internet. That day I learned from the mentally ill agent Camilo that I would be sentenced to five years in prison, that it before the sentence had been passed by the court.

My sentence was already decided by State Security, and my presence at the event was just a simulation. It was obvious that the government would not accept the criticisms in my blog, my presence at demonstrations, then the open letter to Raul Castro, and the ultimatum that if they wouldn’t release Rodiles, we would go again to the police station and another confrontation would occur.

It’s true that UNEAC tried to intercede, for which they met with my attorney and my family. The attorney and the poet were surprised by the sentence, no less than five years. But the institution was immediately silenced by the former minister who today is an advisor to the President, Abel Prieto, who made it known that I was a counterrevolutionary and he would do nothing to help me.

In the next visits of my family to the site, the officials and the lawyer, poets nd artists in general who found themselves facing the institution, began to withdraw, “not me,” was their response. The instinct of solidarity disappeared, and they began to show their surly sullen sides and without wanting to found themselves between a rock and a hard place. They preferred to compromise with their conscience. Thanks to these agreements, the regime just celebrated fifty-five years in power.

One day it will come to light, as always happens, how, what and who drove my imprisonment and who shackled the Cuban Writers Union. To support the injustice of the government, Abel Prieto, personally, with the head of the Retamares family, and as the poet says you have to be careful, he prepared “8 women” who worked to get signatures against me, as a political play. They, and some committed and others terrified, from the headquarters of UNEAC, worked to cast more mud on the institution and their lives, before the cowardly gaze of the majority of their members. We expect that history will put each one in his place.