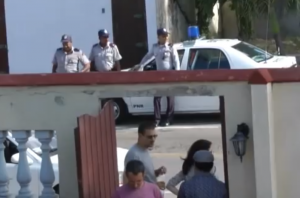 Havana, Cuba, December, www.cubanet.org — It was after 10 am Saturday, December 7.  The patrol car of the PNR (National Revolutionary Police) braked at my side, a few meters from where I live.  The uniformed officers got out of the car, and one of them asked me for my identity card.  With no further explanation, they pushed me against the patrol car, searched me, and put me in handcuffs.  Then they put me in the vehicle.

For almost an hour, we rolled through various zone of Mariano and La Lisa.  In an area near 100 Street and 51st, a Suzuki motorcycle approached.  The driver, dressed in civilian clothes, face hidden in the helmet, told the uniformed officers:

After 5 pm I managed to return home.  It was growing dark when Antonio Rodiles called me by phone, and I told him what had happened.  A little later I was entering his house with a backpack loaded with necessities for surviving as a refugee there in the following days.  Like me, other members of the work team of Estado de Sats were coming together in the next hours.

When I arrived, Walfrido Lopez was polishing the details of the conference about means of communication and human rights.  The First International Meeting about Human Rights and Accords of the UN was due to open on the 10th.  Kissi Macias, wife of Luis Eligio, from OMNI, was there too, editing videos sent by various personalities.  At dawn on Sunday, Boris Larramendi arrived directly from Club Fabio, together with Ailer and Antonio who presented their concert there on Saturday night.

By that time, the news about detentions of activists and members of independent civil society was shaking the whole country.  On Sunday the 8th, Dixan, Sats collaborator, could not leave his house, and if he did, he would be sent to Vivac, detention center for political cases located in Calbazar.  Antonio and Ailer went to look for him, and a traffic patrol car, obeying orders from a motorcycle rider, intercepted them and then tried to capture them at the door to Rodiles’ house.  The police officers confiscated the car’s authorization document, and warned Antonio not to go out driving the car again.  Fortunately, now Lia Villares and her husband Luis Trapaga were sheltered together with us.  By that time, the wall of DSE (State Security) troops and uniformed police officers from the PNR (People’s Revolutionary Police) intensified.  By pure miracle, and with the darkness of night in his favor, David from OMNI passed through it and arrived at the house.  Also, Claudio Fuentes, Regina Coyula and the journalist from Hablemos Press Pablo Marchan jumped the fence.

On Monday we were 19 refugees.  The next days were of entrenchment, deep fellowship, and survival.  Also of much tension and stress, especially in the hours that followed the detention of Antonio, Walfrido, Calixto Ramon and Kissi on the 11th.  State Security surrounded the house, even on the ocean side.  The providential downpour that closed the area during the first hours of that night prevented greater evils. They were obliged to dismantle the repudiation platform that had been retrofitted with a powerful audio system.  The participation of two popular dance music groups was expected:  Arnaldo and his Talisman and Elito Reve and his Charangon.

Several stalls for the sale of rum and beer had been set up.  Evidently, the intention of the DSE was to ply with alcohol the “mass” of concert attendees and then use them in order to hide their civil troops among them, and to attack Rodiles’ house.  The suitable cloak  of night helped them to justify the witches’ sabbath. While it was raining, Boris Larramendi gave a concert of “pure blood,” and David of OMNI offered his own to welcome the return of the detainees at the stroke of 7 pm.

The silence that the ruling champions of the “Cyberwar” have kept during these days is a clear symptom of the demoralization in which their bosses of the DSE (State Security) find themselves.  A small group of refugees in Sats curbed the bullying of a corrupt and decadent regime.