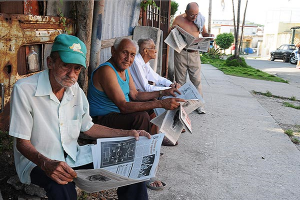 HAVANA, Cuba.  Jose Manuel Rosado, 74 years of age, from Havana del Este, stands in line at four in the morning to be among the first to “fill up his checkbook.”

The bank opens at 8:30 for multiple transactions.  Many other people like Jose Manuel will wait patiently, on foot, whether in intense sun or cold and rain if it is winter, in order to cash their retirement.  Jose, his two-hundred forty pesos (ten dollars average), which will vanish in the first food purchases and payments for services.

Maria Victoria, 81 years old, stands in line in front of Branch 286 of the People’s Savings Bank — a state bank — in the San Miguel del Padron township:

“I retired at 65.  I was a cook in a business the last thirty.  I worked another eight years.  The money goes to deficient nutrition. I “resolved” my food at my work, do you understand, for my home.  Now I almost cannot walk because of my ulcerous legs, I am diabetic. I rent a pedicab to go get my cash. A dollar going, another returning. Fifty pesos spent, but it is dangerous to walk through broken, dark streets, exposed to robberies to go to the bank.”

She pays another fifty pesos monthly on installment for a bank loan for the purchase of her Chinese refrigerator. She has paid off five years, five are still left.

Pensioner Eloy Marante, 76 years old, pays triple the tax for his courier license. Day by day, he loads, transports and distributes gas cylinders to homes with his tricycle, in order to obtain a supplement for his lean pension.

“We run errands in the warehouse, attentive to if they are selling the piece of chicken allowed to those on a special “health diet.” We pay electricity, telephone, gas. We take the little kids to school and pick them up; take the snacks to the kids in high school, also we do favors for neighbors for a small tip. Jobs that the family throws to the old people. The worst: standing in unending lines to exchange bills for coins because business clerks and bus drivers say they don’t have change!  An fraud*,because the government does not demand responsibility. . .” says Jose Manuel.

Milagros Penalver, director of Budget Control for the Ministry of Labor and Social Security, says there are 672,568 retirees and pensioners out of 2,041,392 people over 70 years of age, according to the Population and Household Census of 2012.

Significant is the prediction by the Center for Population Studies and development of the National Office of Statistics: 33.9 percent of the population will be over six decades old in 2035.  The birthrate continues in permanent decline because of factors so adverse to procreation.

*Translator’s note: The fraud is refusing to give the customer coins and so the business or bus driver “keeps the change.”