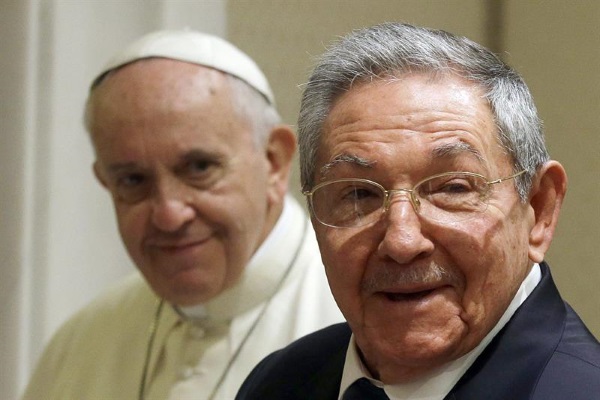 Cubanet, Miriam Celaya, Havana, 12 May 2015 — Yesterday, Tuesday May 11, 2015, the front page of Granma, the official organ of the Communist Party of Cuba (PCC), showed a photograph of the Cuban President General amicably shaking the hand of Pope Francis in Vatican City. Quirks of politics, to convince us of the survivability of the Castro regime, represented by another member of the same caste that in the decade of the 70’s and 80’s harassed members of religious orders, reviled priests and marginalized the faithful. Now, just like that, the Castro regime perfumes its stubborn Marxist conviction with myrrh and frankincense, and it is almost hard to believe that this seemingly respectable octogenarian who visits with the Pope is one of those guerrilla leaders of that Revolution that was anticlerical, antireligious and church-phobic even before declaring itself Marxist.

In retrospect, the war against religious faith in Cuba was not just a momentary attack, but a policy of systematic and ongoing state-sanctioned persecution or discrimination against individuals for reasons of their religious beliefs, while, at the same time, Marxism-Leninism, that other fake religion, kept spreading with the aid of the Kremlin’s petro-rubles.

Thus, just like in the days when Christians hid in Roman catacombs to celebrate their sacred rites, in the years of bloody Sovietizing doctrine in Cuba many publicly denied their faith while attending sneak churches sufficiently distant from their neighborhoods so as not to be recognized and betrayed by their neighbors. Those were the days that faithfulness to God was not only irreconcilable with the Communist militancy, but constituted a serious obstacle to getting ahead in one’s education or employment.

We’re just making mention of Catholic Christians. Jehovah’s Witnesses, considered the quintessence of ideological poison that needed to be eradicated by the roots to safeguard the Revolution, were martyrized, and as such, suffered the worst wrath of the Bolshevik commissariat.

With the end of the Russian Communist adventure in this and other regions of the Third World, and the loss of its European satellites, the anti-religious crusade in Cuba came to an end, and the chameleon-like ability of the Castro regime was evidenced, when the unthinkable became reality: officially, overnight, it was established that Marxism was not incompatible with religious faiths.

And then, with the childlike enthusiasm characteristic of the Cuban people, not only did the Communist militants dust Bibles, old images of Christ and the Catholic calendar, or wear colorful necklaces and other attributes of the African deities, but many members of religious sects who had remained true to their faith, courageously facing persecution and ostracism, ran to become Communist militants. Obviously there are always those who fail to see the difference between one system of belief and another, between one dogma and another: in short, for some, everything is summarized as an exercise of pure faith.

There is a popular Cuban saying that tells us to remember Santa Barbara when it thunders. Castro’s leadership is no exception, so the Castro epaulets and Catholic cassocks have once again been reconfigured without reverence.

God’s return to this island purgatory was first blessed in 1998, during the visit of Pope John Paul II, and without the benefit of repentance or even an act of contrition for its many wicked acts, the Great Orate, active back then, allowed the return of the Christmas season and Christmas carols banned for decades, and the Catholic Church began to recover larger areas, though civil rights for Cubans did not return, and political repression continued. Praying to God while swinging the mallet, says a Spanish proverb.

The government never apologized for the many acts of plundering the Church nor was there an apology to religious members, sacred or secular, rich or humble, though, in truth, the victims have not demanded an official explanation. The lambs are for sacrificing. Thus, the system self-forgave its own sins without even mentioning them and without doing any penance. Today, the Cardinal and the Church have become almost commonplace at some public events, and even –Oh, Marx! arise and watch the sacrilege! – the most important religious events have begun to be televised as good ones and reported by the supposedly “Communist” press.

The second papal visit to Cuba, when the ‘defunct’ Benedict XVI blessed all of us, including the regime, turned into the consecration of the symbiosis between Marxism and Christianity. For some time now the manuals consulted by students have not stated repeatedly that “religion is the opium of the people,” as once proclaimed our mandatory core textbooks.

And, as if the hand of God had turned this Island topsy-turvy, the furious former guerrillas and their troupes have started to attend religious services and to accept (or seek) the pious mediation of the Church and the high clergy, formerly stripped and humiliated by the arrogance of a proclaimed Communist Revolution to solve some uncomfortable domestic minor matters – like of the prisoners of the Black Spring, necessary to free without it seeming as a defeat of the revolution – or, more recently, to reconcile with its staunchest enemy, “US imperialism,” in order to help them extend their time in power for a little longer while they remain in this vulgar material world.

Now, with the visit of the lesser devil to the Vatican, it has become known that the General-President and Pope Francis bless each other through their prayers, and the thought of a praying Castro stands out in its grotesqueness. But so magnanimous is the Church of God. In any case, none of this may prove sincere, but at least everything looks very touchy-feely, just like in the best soap operas ranked #1 by the people.

Believers say God works in mysterious ways, and it must be true, because, without knowing how, it seems that the miracle of conversion of the devils at the Palace of the Revolution into loving lambs of Christ has taken place, and right now they seem to be closer to the Lord than the millions of Cubans who continue to suffer lives of material deprivation and the absence of rights. At this rate, I bet the day will come when future Cubans will witness the canonization of these crooked olive-green old men. And that would be proclaimed, without doubt, as another one of the Revolution’s resounding achievements. After all, maybe it’s really just a matter of faith.