HAVANA, Cuba, October, www.cubanet.org – A teenager, a wannabe to the “reggaeton fashion,” succeeds in paying for his Spanish Language exam grades on a regular basis: “In my high school you can do business, provided that you are willing to pay well.”  The young man, whose name I was not permitted to disclose, aims to get through the remainder of his high school years  in the same manner. “My older sister supports me since, “jineteando” [prostituting herself], she met a Yuma [foreigner] loaded with “baro” [money] and “got her claws into him.”

He aspires to attain fame in that musical genre, very popular in Cuba.  Because, in his own words “it is very lucrative, faster than going to school and getting a degree or going to a trade school.”  When I asked him what he’ll do once reggaeton is over, he looks at me incredulous:  “That’s never going to happen”.  Then he slowly looks at my long hair and says:  “And you guys, the “frikis” (rockers in the popular jargon), nobody sees you guys in the radio or TV.  But reggaeton everyone supports it, from the Communist party to Lucas on television”.

Lucas, for those who don’t know, is a national television program that transmits musical video clips produced locally. In the absence of internet or other means, this program, directed by Orlando Cruzata, is taken like a barometer of the musical popularity in the island. Everyone knows that the burgeoning producer PMM is the Lord and Mistress of this television program. I try to clarify this last detail to the kid, but he doesn’t even flinch: “Of course, dude, the people with the most money are the reggaeton musicians; look at Daddy Yankee’s last musical video, he has a tremendous Lamborghini.”

Then he explains his point of view about what he considers to be a promising future:  “As soon as I finish 12th grade, if I don’t buy a diploma beforehand; my sister is going to give me the money so I can start my own musical group and buy the entry to a musical company… Then, I make a couple of hit songs so they stick (so they are popular) and I film a hot video clip like Chacal & Yakarta.  They’ll censor it, I become famous like Osmani Garcia and then I go to Miami.”

I listen to him, and think about that chant that we repeated singsong-like in elementary school:  “Pioneers for Communism…” or the other one that would add:  “Where a communist is born, difficulties die.”  Right after, the kid feels comfortable enough and improvises what in his view will be his first super hit on the “Lucasnómetro weekly.”

I am in a town on the periphery of the capital, Guanabacoa. It is Sunday, the day is boring and the week depressing.  After this instructive conversation with the “new man of the XXI.century.cubiche.cu”, I conclude that the paleontologists of the future will have a lot to talk about.

I go out to walk the streets.  I observe the overwhelmed faces of the few that challenge the mid-afternoon sun.  I am sweating and the smell of the accumulated garbage piles (“in each block a committee…”) keep me company the rest of the way.  I see a sign that looks like no one has been able to erase it.  It is pretty offensive and I take a picture for you readers.  Then I see others with “spectacular” spelling errors and I do the same.  Then I understand why the “owners of the estate” [the Castro brothers] want to start a battle with the teachers that tutor students privately. 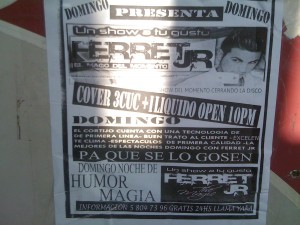 As I am heading back, I stumble upon the “reggeaton superstar”.  I show him the pictures and ask him if he sees anything wrong.  He looks at them for a few minutes, he gives me the camera back and says: “Dude, everything is cool”.