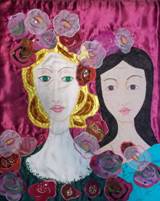 Patchwork portraits by the author

When the ill-named Special Period began in 1989, three years had passed since I had quit my job with the Cuban National Commission of UNESCO (with all that that implies), where I worked as a secretary. I was making 148 Cuban pesos (CUP) a month at a time when a pound of ham that tasted artificial and weighed half that amount once you removed the excess water cost 6.00 CUP. I was earning only 6.20 CUP a day.

Around this time, thanks to my very good and late friend Poncito, I had found out about the Cuban Association of Artisan Artists (ACAA) and how much it was growing. So, after submitting three samples of my work and letters of recommendation from two of its member artists, I was admitted to the organization, which allowed me to be my own “immediate supervisor,” improve my quality of life and work from home, which had become a veritable artist’s studio.

By then my older son was pursuing a career in design, my niece — who was also living with us — was in college and my younger son was in primary school. On weekends the house was filled with kids and on weekdays my friends — all of whom were professionals who worked  nearby — came over for a little peace and quiet, a cup of tea and a friendly atmosphere.

Since we all truly believed this was the end of the System, I “broke out” (as we often say here) my best porcelain china cups — family heirlooms — and filled them with Soviet black tea or an infusion of lemongrass stalks from my patio. Sometimes I managed to make a tasty pudding to sweeten our get-togethers. Outside my four walls the world looked grey and menacing. People on the street walked with their heads down and their shoulders slumped.

I remember one particular birthday during this period when there was nothing in the stores and only a few vegetables in the produce market. Some architect friends suddenly appeared at my door singing “Happy Birthday” and carrying a beautiful basket they had fashioned from cardboard and decorated with a beautiful bow made out of newspaper. Inside it they had carefully and tastefully placed some green bananas, several taro and half of a small pumpkin.

My friend the painter showed up with a beautiful painting of sunflowers. And the dentist, who was never able to fill even one cavity for me due to a shortage of materials, did me the honor of giving me a pixie haircut. He was a master at challenges like this. It was without a doubt one of the most memorable birthdays I have ever had.

As time went by, everyone’s lives gradually got more complicated and they began leaving the country. My children also left and this house, which had always been so happy and bustling, began descending into silence and solitude. I continued working as an artisan-artist and started meeting new people, making new friends (some of whom have also left) and seeing a new world open up through my blog.

Other wonderful people keep crossing my path, people who have given new meaning to my daily routine as well as the courage and strength to carry on. These days I am busy preparing for the next exhibition of my work outside “my planet,” taking advantage of our newly “restored” right to travel freely, which had been denied us for almost half a century.