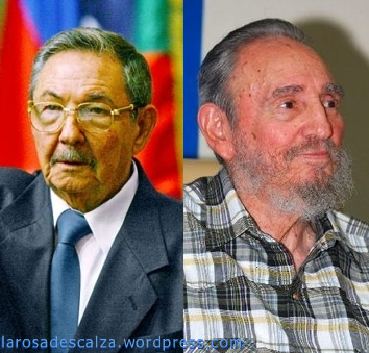 The “younger” (almost 80) of the Castro brothers — and the current president of Cuba — attempts to govern and as if playing with a ball; tossing it from hand to hand drawing a neat arc in the air. I had to get really close to realize that it was not a toy ball that the Cuban leader was tossing, but a steaming hot potato.

Yes! That polygamous tuber we like so much and that helps us eat and which is officially married to McDonald’s, Burger King, etc., “it gets hotter” with every plate that goes missing from the Cuban table, with every child or elderly person, man or simple woman, who don’t eat it for long periods due to indolence, bad management and governmental administration. And this isn’t just a current issue but a recurring phenomenon which has been ongoing for many years and in a general form.

Raúl Castro had to wait for quite a while before “the magician” decided to cede to him the stirrer for the pot where he had already tossed all his ingredients. Even so, we note that the younger of the brothers has assumed the responsibility with dedication and has put out some “good news” to the citizenry which bothers the guru a little, to the point that every once in a while he “reaches out his arm” to try to retrieve the stirrer, which is further from him the older he gets and he speaks, and this is an almost impossible task to bear for someone who already doesn’t enjoy good health.

The old wise man supervises, guides, determines … and gives the impression that he’s given up his post with conditions and reluctantly.

He allows his brother to stir the soup, “but without disturbing it much” because the components “can get hasty,” and that, in his opinion, isn’t good.

Even so, he has cast spells that threaten immobility and repetition of the for-life menu, and the society that worries about “until when?” starts to become desperate while it dreams of a better Cuba.

Evidently there are signals which confuse Cuban society and international opinion a little; and at times it might seem that it’s the historical leader who pushes the buttons on the stove where the sweet future of the homeland is being cooked and hides the recipe book that represents one of his treasures beneath his tracksuit, as if at these heights the recipes for the evidence of the broken Cuban model are interesting to anyone! But the most delicate and regrettable part of the affair — too serious to take as a joke — is at times the publication of his reflective sketches which appear to delegitimize the current leader.

This makes many Cubans reflect about it: “If this is how he treats his own brother what will be the treatment for the rest of us?” He also flares as a critic and solves with rhetoric the “grave issues of humanity” forgetting how complex these issues are for Cuba.

I believe he should probably employ all that time understanding other topics that could improve the quality of life for the population and envisioning the solutions to the current crisis, and change his targets — at least for a moment — from the United States and those whose governments criticize him or point out the flaws in the Cuban political and social-economical system; something many assimilate as a make-believe exercise to divert focus from national problems which should be at the top of our concerns and on our list of priorities so we can later look after any other issues in the rest of the world.

His experience could be dressed with a more constructive view and more attentive attitude towards the right to help this country and his President brother.

There is another intention behind the disorienting messages around the top Cuban leaders and the presumable quarrel between them: Duality? For quite a while they have been baking a high level little cakes of a “fraternal coup d’état” to distract the world.

A syrupy sweet with expertise to look for solidarity toward the youngest of the Castro brothers, and fundamentally to win some time and security against possible real or imaginary aggressions from the planet Earth judge, who happens, by geographical coincidence and geopolitical chance, to be our neighbor.

But it is a tough pill to swallow and very few seem to enjoy it. All of these distracting maneuvers concern the Cuban citizen because it has been fifty-two years of recurrent tactics that guarantee a stronghold on power for the never-ending dictators.

I believer these treacheries are a part of the strategy of giving compliments and the pleasure of being consigned to posterity as a tough, intransigent stoic, and a long sentence of etceteras that he thinks, of course, will adorn any references to his personality in history textbooks and biographies that will undoubtedly be written around the world.

But as long as high-class rascals win, this society loses. It is a very long process where those in powers have stopped at nothing to remain in charge, leaving a trail of “everything is fair” and “the end justifies the tricks” in their long journey. This attitude has permeated all layers of Cuban society and the responsibility of the governing class in the current crisis of values that is unquestionable and unarguable.

It is not easy then for he who represents the presidency to face a corroded and rusted coffin for which he is also responsible, and for which if he doesn’t have the keys he will have to definitively break the lock to remove all the citizen hopelessness and frustrations, to avoid the violence of disqualification, and to work with boldness and dedication for the happiness of this suffering nation, for the perfecting of a government system that is fair and concerned for the well-being of all citizens rather than just concerned for keeping the privileges and influences of a small group in power.