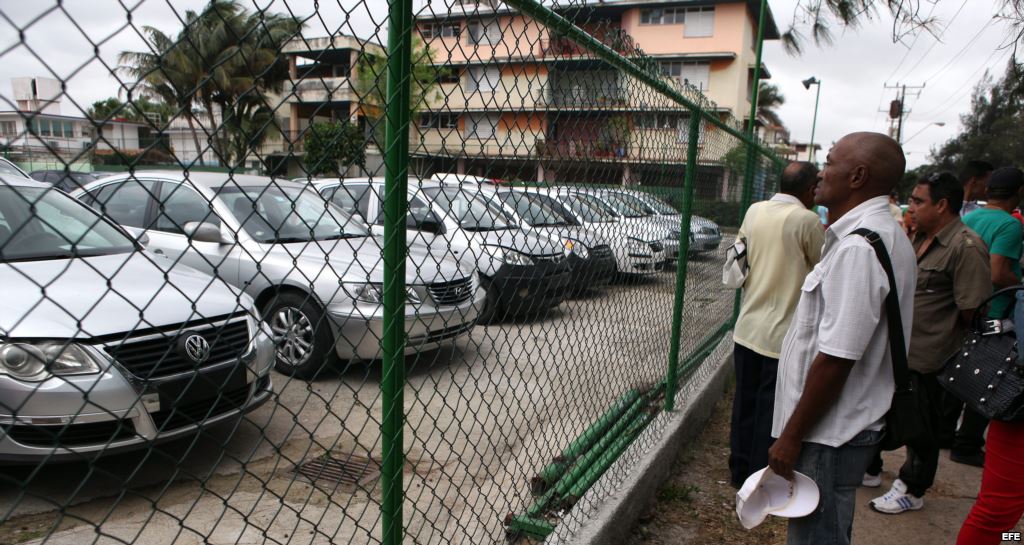 If you have some years like I do, you will remember that some time ago, trendsetters, while they publicly occupied radically conflicting positions on the big billboards of the ideological scene, coexisted embraced in the comfort of the only and non-proletarian star of Mercedes-Benz.  Beautiful symbol that still today represents a kind of category for those who are anchored to the era of the World War and “the Cold War.”

In Cuba, the hunger to buy a status symbol doesn’t mean the brand of the Teutonic giant, but any car with the flavor of liberty and air conditioning.  The gentlemen “upstairs” well know that under the publicized slogan of “updating the model,” more than achieving the dreams of a sacrificed people, is to make money off them.

The Cuban government eliminated the uncomfortable restriction that demanded an official permit to acquire a vehicle, but in exchange, the prices are astronomical. Before this new measure, the privilege of having a modern and private car was only within the reach of a certain number of workers, a limited group of high officials (this includes friends, girlfriends, lovers, brown nosers, relatives), famous artists and elite athletes.

Prices might infuriate, but not scandalize.  Experience has shown me that there is nothing easier in our archipelago than to die facing the sun, or to live with eyes closed.  Cuba is a captive market without second options.  As the days pass, Cubans will accustom themselves to this new level of “anti-life.”  Did something happen in the afternoon in which without warning they raised the prices of milk, electricity, water, soap, beer, and gasoline?

The wheeling and dealing in used cars, whether of second or seventh hand, will continue functioning and hybrids will be imposed.  Permit me to clarify that the Cuban hybrid car is not conceived in that classic conceptual format that you know, which combines a combustion engine with an electric one.

It is a work of art, a colossus of the industrial gothic; which to achieve, primarily you have to acquire a circulation permit for a non-existent or hopeless car; then resolve by any means possible an authorization to buy a rebuilt motor for this supposed automobile that only appears on paper.  With that paper, the motor and some indulgent gratification, known as a bribe, which never hurts, get another authorization to buy a body in the path of what one day were rental cars for tourists; and finally, with everything in order and a magician, this Frankenstein is assembled that, simply said, broadly speaking, sounds ugly but is beautiful.

The new cars, without doubt, will be sold, including the Peugeot 508 for 262,000  dollars.  Someone has to show off, and for that there is everything; presumptuous officials, artists, athletes, new style self-employed, repressed with dollars under the mattress, and of course, the kings of the dawn.  In short, the speculation of Havana.

I do not believe that any businessman, nor the buzzards of “Cuban-American merchandising” that are now taking their baby steps of sending cars (stolen, new or used) from Miami to some nearby port, in order to then locate them in Havana, inspired in this apparently anarchist measure, and excited about the car show, might be able to travel and sell cars on the island to everyone who wants to buy.

In the emerging car business of Cuba it is not the market but the State who will dictate guidelines. An old government tactic called plunder with iniquity.