HAVANA, Cuba, November 1, 2013, www.cubanet.org.- The trial of the White Lady Sonia Garro, which had been scheduled for today, was suspended yesterday without explanation by the authorities.

Her lawyer, Amelia Rodriguez Cala, appeared before the People’s Court to finalize the details on Thursday, October 31, and no one could explain the cause of this last minute decision.

Looking for first-hand information, Cubanet spotted Yamilé Garro, sister of the accused, who had visited her that morning in Guatao women’s prison.

According to her sister, Sonia is optimistic about her defense by the attorney Rodríguez Cala, who historically has defended those prosecuted for political reasons.

Remembering what happened on March 18, 2012 — the day that assault troops stormed Garro ‘s house, within a few hours of the visit of Pope Benedict XVI to the island — the sister of the defendant contends that she did not commit the crimes for which charges have brought by the prosecution.

“It all began with an act of repudiation,” she explained.

A crowd organized and led by State Security stationed themselves around the Garros’ house, in Marianao, to repudiate them. The Garro couple reacted by shouting “Down with Fidel!” and placing anti-government posters in the doorway of their home. This provoked the troops to violently storm their house. Sonia was injured in the leg with a rubber bullet.

It’s worth remembering that, on the eve of the visit of the Supreme Pontiff to the Island, all the human rights activists and political opponents ,who State Security and the top leadership of the country thought would attend the Papal mass in the Plaza of the Revolution, were detained.

Garro ‘s lawyer also filed a request Thursday for a change of custody, which would involve the immediate release of her client who is awaiting trial.

In a telephone interview, Dr. Rodriguez Cala, told this reporter, “I place my hopes in the Court. The fact that these people are political opponents should not determine the sentence. Ideally the trial would have already been held.”

Sonia’s 17-year-old daughter, Elaine Bocourt Garro, is waiting for her at home. When asked what she can tell us about her mother, she struggles to hold back her tears and then tells us, “I miss her greatly. I love her, she’s my mother. I need her. Also, they’re holding her on a whim… she hasn’t done anything.”

Inconvenient for the Jailers

Garro has been in prison without trial for one year and seven months. In all this time, she has experienced very harsh conditions. From being locked up in solitary confinement for 20 days, to the gunshot wound in her leg being infected by Staphylococcus aureus, to suffering beatings by several armed guards.

This latest incident, according to her sister, dates from a few months ago, but she can not remember the exact date. It happened when Garro forgot her card to make phone calls and had to return to the detachment where one of the officers was mistreating a prisoner. Garro said facing the jailer who, if he was in such a bad mood, it would have been better not to have gone to work. 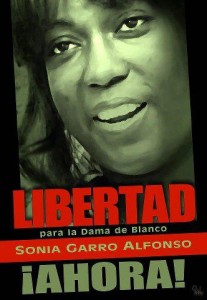 “It wasn’t even a minute before several guards jumped on her and she was beaten with batons,” Yamilé said.

Incredible as it may seem, she adds, “On the medical certificate which was issued several days later, it said Sonia was the aggressor and she had attacked the guards, who were victims.”

Since a month and a half ago, Garro has been suffering from a kidney infection. She still hasn’t received medical treatment.They just put her on painkillers and send her back to her cell.

The prison authorities tell her sister that they don’t have any budget for this type of medicine.

“This isn’t new. When she was infected with staphylococcus, they said it was due to lack of vitamins and it was just a matter of taking vitamins and iron. Now she had Staphylococcus aureus on her skin and boils erupt periodically,” says her sister.

She also says that, in prison, Garro witnessed and reported an unfortunate event known as “the Mutiny on the Mattresses.”

The guards didn’t allow a group of prisoners to leave the laundry area and they began to protest. The reaction of the guards was to lash out against them. Therefore, the prisoners rebelled burning a mattress.