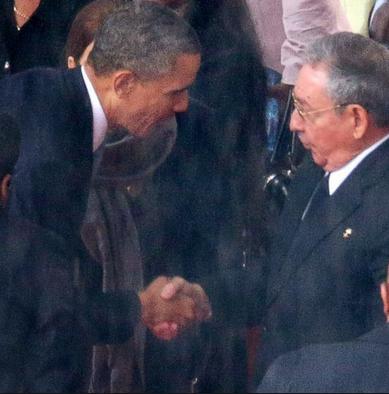 I’m sure that it must have been embarrassing for U.S. president Barack Obama to have greeted the Cuban dictator, but I can’t but admit that it was a brave act: the delicate cross of the white gloves in the face of the adversary. The alternative would have left much to desire and been childish; in addition, the message then delivered in the words of President Obama, when he said that some leaders pay tribute to Mandela and reject the dissidence in their own countries, was the finishing touch, and a brutal one, to the delicate sequence of his greeting. 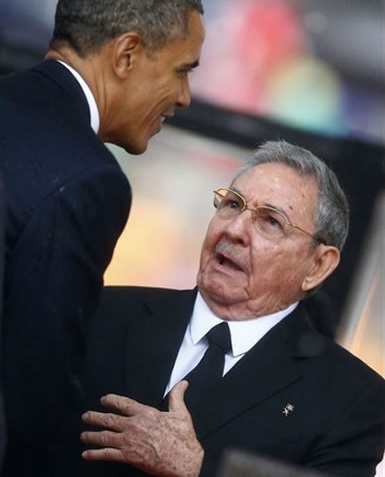 The event appears to me like a move in the diplomatic chess game, and history will remember the gesture positively. I recall a person who had an anthology about “the white gloved slap,” and certainly this will be added to his collection. And it reaffirms that there is contact between the two governments to solve some of the particular conflicts, such as the imprisonment of Alan Gross.

These are times of dialog; watching what is happening in Iran, Syria, and recently in Ukraine is imposing another logical order on these times. Hopefully the Cuban leader is included in President Obama’s invitation. It is a unique opportunity for a phone call, and then actions that determine a democratic will, like the ending of aggressions against the Ladies in White, the arrests and beatings of members of UNPACU (Cuban Democratic Union), and the free determination of programming without assaults for the activities of Estado de Sats. It should be followed by the release of Sonia Garro and her husband Ramón Muñoz, and the hundreds of opponents that await in Raul’s jails. The dictator Raul Castro can accomplish everything with single gesture of picking up his phone.

It is a unique moment that we can be sure he will not take advantage of, because the stubbornness of his brother, and now him, has not been in vain: a society has lost its values and the love of belonging to this country. However, the person who shone at that meeting was the man from the American side. There is no need to ask for a vote of confidence for him, his actions precede him.

Although circumstances sometimes inspire us to be extremists, we must pause, think with cool heads, and not let ourselves be carried away by emotions. More than a handshake, it was the iron fist in a velvet glove.