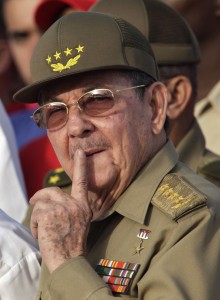 Carlos Alberto Montaner, 10 December 2016 — Raúl Castro is on his own. Gone is his mentor, his paternal figure, the man who molded his life and led him at gunpoint — literally — from insignificance to the nation’s leadership. But he did so brusquely, reminding him every so often that he despised him for his intellectual limitations. That never ceased to hurt Raúl.

Many years ago, Raúl realized that Fidel was the revolution’s essential stumbling block — his arbitrary voluntarism, his stubborn foolishness, his improvisations, the odious way in which he wasted time in interminable conversations and perorations. But he also knew that without Fidel there would have been no revolution. On one hand, he admired him; on the other, he rejected him. There was something monstrous and fascinating in a person who talked for eight consecutive hours without the least concession to his bladder or that of the defenseless interlocutor.

Nevertheless, life had taught Raúl that a deeper problem existed: Marxism-Leninism, in which he believed blindly in his youth, and the reason he killed others without compunction, was a misguided doctrine that led to gradual impoverishment.

If Fidel had been different, or if relations with Washington had been a lot better, nothing essential would have changed. The unproductiveness of the system did not depend on the leader’s errors or character, or the economic embargo, but on the system’s lack of adaptation to human nature. It always fails.

The same had happened in the Soviet Union, in East Germany, in Czechoslovakia, in Poland. Whether the subjects were Slavs, Germans or Latins made no difference. Romania had been granted “most-favored nation” status by the United States.

It mattered not whether communism was being tested on societies with Christian, Islamic or Confucian roots; it inevitably failed. Nor did it depend on the leaders’ quality or formation. Their plumage could be varied: lawyers, union bosses, professors, teachers, even elevated labor activists. None was any good.

In addition, it was easy for Raúl to confirm that the market economy, with its simple way of rewarding the entrepreneurs and punishing the lazy, gave large though unequal fruit. His own father, Galician Ángel Castro Argiz, was a living example: he arrived in the Republic of Cuba at a young age without a penny, even without education, but at his death in 1956 he left a fortune consisting of $8 million and an organized agricultural business that employed dozens of people.

The issue now facing Raúl is how to dismantle the horrid contraption generated by his brother and himself almost 60 years ago without being buried in the rubble of that useless system. By now he knows that his “guidelines,” which is how his timid, sometimes puerile reforms are called in Cuba, are ill-placed Band-Aids stuck on a socialist system beyond salvation, a system made worse by military management in all its economic activities nationwide. But he has said, over and again, that he didn’t replace his brother to bury socialism but to save it.

I suppose he already knows that communism is beyond salvation. It has to be buried. That’s what Mikhail Gorbachev discovered when he tried to rescue it by applying drastic reforms: perestroika — giving it a transparent air of fearless discussion — and glasnost –convinced that it could be the best productive system created by human beings.

In a few years, Gorbachev’s salvage operation sank communism, not through the clumsiness of the rescue team but through the system’s insolvency and the poor theoretical formulation of Marxism-Leninism. Central planning was a bungle. Keeping the mechanisms of production from private hands was counterproductive. The committees for the assignation of prices were totally unaware of the people’s needs or reality. The constant presence of the political police destroyed coexistence and generated all kinds of psychological ills.

When Raúl Castro read “Perestroika,” Gorbachev’s book, he became so enthused that he ordered a special edition just for his officers. Fidel found out, scolded him in a humiliating manner and recalled all copies. Fidel was not interested in the people’s material well-being but in his own permanence in power. Gorbachevism, he said, would lead to the disappearance of communism.

He was right, but only half right. Raúl is at the same crossroads where Gorbachev stood, but with the added flaw that today almost no one — much less the profound idiots — thinks that communism can be saved. At least, none of the nations that have managed to abandon it has reversed that decision. They learned their bitter lesson. For now, the symptoms show that Raúl will maintain the same Stalinist course drawn by his brother, but there’s a difference: Fidel is no longer alive. He is buried in a huge rock at Santa Ifigenia cemetery. If Raúl doesn’t rectify that course, he is a coward.

Ed. note: English version is from Mr. Montaner’s own blog.