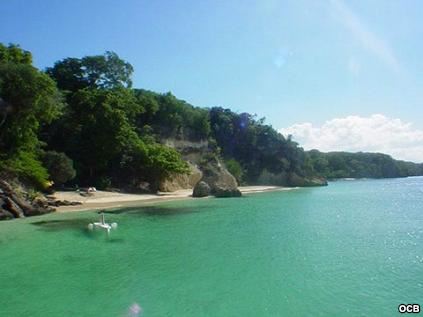 Juan Juan Almeida,18 February 2016 — The latest property to be auctioned off is part of a plan to lure big American investors called Project Ramon. It involves destroying a small local beach and converting it into an exclusive tourist resort catering to a very few.

This new ecological disaster is being forged in Ramon de Antilla.

Motivated by insolvency and economic uncertainty, the country’s top leaders and their managers have decided to make some changes. The chosen option is to sell the island to the highest bidder. I am talking about bidders of the highest caliber — an essential requirement — who are interested in breaking into the Cuban market. I am not criticizing them. This is how things have been done since the beginning of time, by setting aside one’s principles. It’s called politics.

It is no secret that Cuban leaders are desperately looking for foreign capital to prop up the country’s fragile economy. And with the untimely collapse of its principal ally, Venezuela, Cuba has become very interested in a range of business opportunities.

The government is offering a range of investment options in projects totaling 8.7 billion dollars. But the key component to be auctioned off, on which only the largest American investors can bid, is known as Project Ramon. It involves destroying a small local beach and converting it into an exclusive tourist resort catering to a very few.

This new ecological disaster is being forged in Ramon de Antilla, an undeveloped peninsula of extravagant beauty located in the town of Antilla, north of Holguin. Nineteen kilometers long, it separates two important bodies of water: the Bay of Banes and the Bay of Nipe.

Located very near the idyllic Saetia Key, the site boasts innumerable natural attractions. In addition to beautifying the area and serving as a breeding ground for sparrow hawks, grassquits, red-billed tropicbirds, multi-colored land snails, reptiles and exotic insects, local residents insist that its mangroves and forests also harbor the treasure trove and ghost of the feared English pirate William Hastings.

The economic crisis and expectations for change in Cuban society have led the regime of Raul Castro to open the gate. And with the tax receipts such a mixed-use development could generate, the project’s planners are hoping to attract significant investment, much greater than what went into building the Varadero resort. Project Ramon is so ambitious that the hope is will become Cuba’s biggest tourist draw.