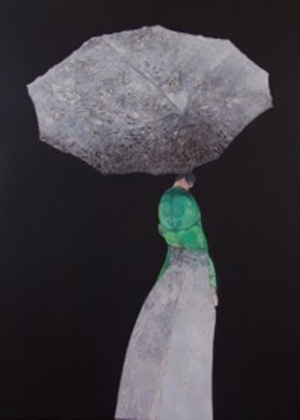 That the essential Cuban painter Pedro Pablo Oliva (National Plastic Arts 2006 Prize Winner) was expelled in May 2011 from the Popular Assembly of the province, Pinar del Rio, is the best thing that could have happened in his life. Since then, the admiration he has won for his work has grown infinitely. A great artist should not tarnish his name or his work with a dictatorship.

Many biographies, however small, highlight the relationships and defenses of the many artists drawn to fascism led by Adolf Hitler, their names tarnished for the rest of human existence; and the same thing happened to the intellectuals who stuck to the Latin American dictatorships. Unfortunately, the same will happen to those involved with the totalitarian regime of the Castro brothers. Luckily, most of them tend to be mediocre types who earn their flattering salary.

I remember I attended the Home Workshop of Pedro Pablo Oliva in company with Dagoberto Valdes, when paying my humble service as a jury member of the Vitral magazine contest. Then he spoke to me about the painting “The Great Blackout,” of extensive dimensions. Really to watch him, I felt part of the story of the Cuban nation was laid out in front of me, in a genuine and original manner.

His family kindly saw to us, invited us to explore the spaces. Minutes Later Oliva arrived and we offered him a brochure given with the intention that he would dedicate it to us. He did so with the humility that characterizes him, and jokingly, given the quantity of fans, he commented only Ricky Martin was allowed that. I, who was one of the last of the group, replied, “Don’t be fooled, if the singer was here, and without reproach, I, at least, wouldn’t ask for his autograph.” He smiled.

Thereafter, each time I went to the capital of Pinar del Rio, I took the time to get to his workshop and delight in his latest creation. There I saw the picture of Fidel Castro supporting a large stone on his head, which greatly alarmed the then Minister of Culture Abel Prieto.

For several years his daughter visited my house because she was a classmate of the daughter of a cousin of mine. With her I could exchange views on his work, season with family anecdotes that enhanced his stature as a human being.

Days after expulsion of the provincial parliament which acted as a delegate , I went to the Colegio San Geronimo in Old Havana . It was raining , and quickly walked past the restaurant La Mina, where upstairs, Oliva has his workshop. He crossed in front of me, also in a hurry, seeking shelter in the doorway of the restaurant, and I could not resist the excitement and shouted, “Maestro, Cuba never admired you so much,” then, surprised, with those eyes of a laughing child he knows how to offer, he stopped and looked at me excited.

I smiled and continued my quick step to take shelter in the portal of the Palace of the Captains and he in turn continued and avoided the rain. I knew that rain was a way to clean your history, away from all the official events and artists supporting  the dictatorship, and that thereafter he would have less space in the media, but more time to do his work. He had that feeling of the lone ranger who supports any artist relegated by the totalitarian regime, and subjected to the nation’s cultural ostracism, although as in Oliva, his nails are sunk in the island where he is rooted.

In any event, an artist creates for the rest of humanity and for all time. That is the advantage we always gave over the politicians in power, no matter how late they are in abandoning their prolonged season.

All Cubans, like you Pedro Pablo, dream of a better Cuba. And we have the unquestionable right to demand it.