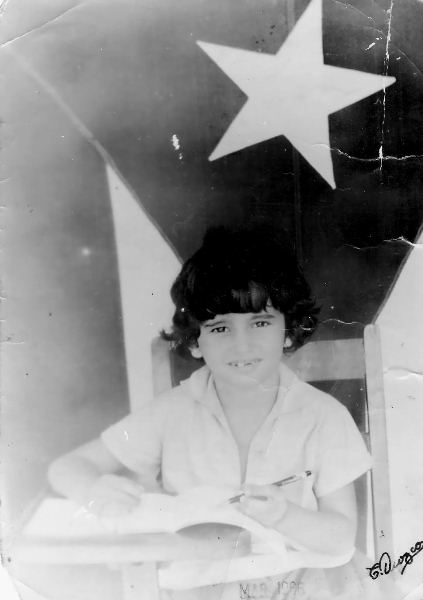 This school year my grandson César began the first grade. He is pleased with the expectation of learning to read and write, but above all he is very excited that soon he will get his blue bandana and become another “pioneer for communism,” like his father 28 years ago, and like his confrontational grandmother a long time before that.

Last Monday, fresh from school, he phoned me: “Grandmother, I’m going to recite poetry and I learned what all the children in my class have to recite the day we put on the bandana.” And he continued, in his clean fresh voice, repeating the rhymed doctrine in the worst doggerel:

For my commander with the sweet smile

I keep forever the sun and the breeze

For my commander with his beard and hat

I cut garden flowers in January

For my commander lost in October

This blue bandana covers me

Struck dumb for a moment, absorbing the bad effect, I surprise myself seeking the stupidest consolations in the world: at least it’s not an ode to the Unnameable, or to the Argentine who murdered so many Cubans with impunity… although I recognize this is a fool’s comfort; before and after, the Revolutionary catechism includes in the program those two protagonists in the sainted olive-green, and there will be other bad poetry, and there will be slogans and ritual perfidies.

Then I was assaulted by the old memories of my own initiation into the Pioneers, when I was the same six-years-old that César is today, and walked gap-toothed and happy about the nearness of my bandana, blue and white then, on the light gray blouse of my elementary school uniform. A photographer came to the school to take pictures of the kids aspiring to the Pioneers, seated one by one at a desk in the school courtyard with an enormous Cuban flag as the background and a pen in hand, as if we were writing the application form, although hardly any of us knew how to write even a little. Because then it was an essential requirement to aspire to the Pioneer organization and to receive authorization from our parents, who had to sign this form giving us their consent, before we could belong to it.

In the span of 48 years some details have changed. For example, in my generation membership in the Pioneer organization was not mandatory, the Pioneer stage was limited to the elementary school years, the bandana was only worn for certain dates and ceremonies, and the textbooks weren’t so overwhelmingly ideological. But basically the content of the organization has always been the same: to establish mechanisms of social control in service to the government, beginning with the manipulation of the conscience of the great masses from very young ages. Thanks to this method, eminently fascist, most of those individuals were subject, if not to the ideology itself, at least to passive submission, acceptance.

For children, however, being Pioneers does not represent a political-ideological affiliation, which in effect it is, rather the bandana is a sign denoting belonging to a school, a group of friends and classmates, who share learning, games, common interests. The bandana says “they are big,” they already know how to read and write or are close to having this knowledge. They ignore that they will receive, between poetry, readings, mottos and slogans, the systematic official brainwashing that their parents and grandparents born under this regime received before them.

In fact, the process of “Communist Pioneerization” has degraded over the last 30 years, through the generation gap between Cubans born just before or just after the establishment of the Castro regime, and the guerrilla caste of the Moncada barracks attack, the Granma Yacht and the Sierras, and those in the wake of the growing disenchantment that occurred basically from May 1980, following the events at the Peruvian Embassy and the Mariel Boatlift.

The “Revolutionary” romance had ended, and in consequence, the conscience of tens of thousands of Cubans gradually began to become independent of the official discourse, while publicly expressed attitudes continued to respond to the call of the government. Thereafter, almost every Cuban who deviated from the Castro creed began to wear two faces and to hold two, opposite, moral standards: a “real” one, for private life with family and close friends; another “false” one, to blend into the labor collective and into society (in “the mass”) and to keep themselves safe from reprisals and accusations.

Thus, the Pioneer initiation rite that marked the official and socially acceptable indoctrination for ideological servitude, has also become a turning point in the exercise of the so-called “double moral standard” (immorality). A vile pact tacitly accepted by the parties, in which the government pretends to believe that all Cuban parents accept the “Pioneer-Communist” militancy of their children, at the same time that they teach their children to “go with the flow” of the doctrine in the schools and to repeat the verses and slogans praising the regime, while at home illegalities and even anti-government speech survives. “What you see and hear here you don’t say at school,” “if the teacher asks you say this, but in reality things are different.”

Finally, there are the children who wear the bandana of “Pioneers-for-Communism-we-will-be-like-Che” even a few days before emigrating with their parents in search of a freedom they don’t find in their own land. And with this practice, for one generation after another, we have inculcated lying and hypocrisy in our children as values for facing life.

Maybe that’s why hearing my grandson recite the stanzas of that bad versification left me cold. However, quick as a flash I thought of a solution when, surprised by my silence, my little boy asked me, “Grandma, why are you quiet? Don’t you like poetry?” “No, but I know many nursery rhymes prettier than that. Let’s make a deal: I’ll teach them to you.” He was delighted. I also know the power of verses, but not to indoctrinate, rather to enrich the soul, to make us free. We’ll see which verses better calm the spirit of my boy, but I’m inclined to think they will be the ones I recite.