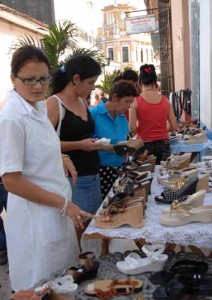 HAVANA, Cuba, August 2013, www.cubanet.org — The school year is about to begin and parents are now shopping around for shoes for their kids. It has been many years since those lace-up leather shoes, known as school shoes, have been sold. They complimented school uniforms well, were durable, protected children’s feet and were fungus resistant.

For some time they have been selling black tennis shoes called Pioneers instead. They go for 120 Cuban pesos, or about 5 CUC (approximately five US dollars). Although children do not like them, they are popular with parents because they hold up well if you reinforce the soles. According to some people, however, they can be hard to find them in the correct size, if you can find them at all.

If Pioneers are not available, then parents have to turn to the hard-currency shopping mall, where quality is not great and prices are high. Finding something that looks good is difficult. Another problem is that after a month’s wear you have to take them to a shoemaker to have the soles repaired.

Similarly, it is impossible to find the kind of closed toe, low-heeled ladies’ shoes appropriate for those daily errands that require long walks. There is no justification for this, especially considering the number of women over fifty in this country.

Some time ago the National Office for Standardization acknowledged that imported goods in Cuba — including shoes — were of poor quality. Then why are they so expensive? This means they remain in the display windows of shoe stores so long that, on those rare occasions when they finally go on sale, they already show signs of wear. 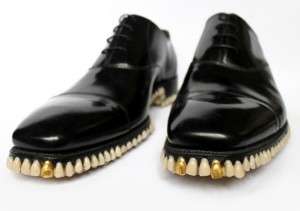 A neighbor, Juan Alberto, bought a pair of shoes at a boutique. He paid 46.75 CUC* for them. The second time he wore them, the leather started to come apart.

Orthopedics, forget about it.

“Looking for a pair of shoes is like finding your way through a maze,” says Gloria, a seventy-two year old woman who needs special footwear because of paralysis she suffers resulting from a stroke. Gloria went to a custom shoe store after her orthopedist wrote her a prescription. She was told she would have to call and make an appointment because they were not filling new prescriptions at that time. 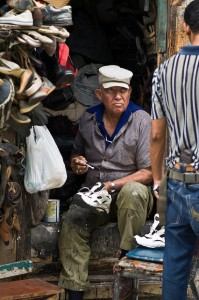 Finally, after several months, it was her turn. Once at the store they took her measurements and told her she could  pick them up in ninety days. Imagine her disgust, however, when, on the day she went to pick them up, she found out they were two sizes too big and were made with velcro instead of buckles. When she complained to an employee, he acted annoyed and told her, “This is it. Take it or leave it.” Gloria took them home and now uses them as slippers.

There is a popular alternative one can often find in building entryways or areas near commercial centers: people selling shoes recovered from buzos, or trash dumpsters, which have been repaired and cleaned. Prices vary between four or five CUP and ten CUP. Believe it or not, there are always customers, especially among elderly retirees.

Gladys Linares was born in Cienfuegos in1942 and is a school teacher. She worked as a professor of geography and as director of various schools for thirty-two years. In late 1990 she joined the Movement for Human Rights through the Women’s Humanitarian Front. She was an active participant in the Cuban Council and the Varela Project. Her writings reflect daily life in Cuba.

*Translator’s note: Cuba has two official currencies: the Cuban peso, or CUP, and the convertible peso, pegged roughly one-to-one to the dollar. The price paid for the shoes mentioned above represents more than two months wages for the average Cuban.