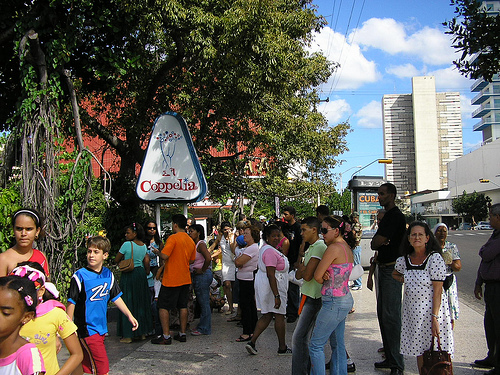 The corner of 23 and L is the center of Havana. It is always lively. At any hour. Together, as if they were shaking hands, we have the Habana Libre hotel, the Coppelia ice cream parlour and the Yara cinema. There are too many blown bulbs amongst the neon lights of the cinema billboard which barely manages to announce a British film, The Imaginarium of Doctor Parnassus.

The cafeteria of the former five-star hotel chain Hilton, today the Habana Libre, full of lights and marble, is a rendezvous for girls on the hunt for a foreign boyfriend and bisexual guys who walk about with the same aim. There are also people with some purchasing power for foreign or domestic beer who watch football on large plasma screens in the bar. The cliques that support Spain, Brazil, Argentina, Germany, Italy, Holland and France are having a great time in the heart of Vedado.

There, in La Rampa, a four-lane street with sidewalks of granite, designed by famous artists, which begins and ends at the Malecon, are concentrated the best nightlife spots in town. In the arcade, right at the entrance of the building, is a television, fans gathered around it to watch the game in which Australia was humbled four nil by Germany.

The noise is tremendous. Although more bearable than the ‘vuvuzela’ on South African stages. The management of the Yara cinema announced that giant screens would be placed outside, so passersby can watch the semifinals and final of the Cup. And that Cuba is not in the World Cup.

Children and adults line up for two hours to get into Coppelia. The ice cream is no longer of the same quality as in years gone by. There is no strawberry nor chocolate ice cream in Cuban pesos. Only for hard currency. Opposite the parlour, a kiosk sells hot dogs 24 hours a day, for 10 pesos (0.50 cents to the dollar), with sufficient demand.

While many see the Adidas Jabulani ball moving around, few have noticed that the Castro brothers’ government is discreetly shuffling the deck. With his best currency exchange and negotiation playing card being the political prisoners. As has always been the case.

Already the opponent Ariel Sigler Amaya has been released from prison. In an ambulance, very ill. To date, twelve have been transferred to prisons closer to their homes. In vans with bars, escorted, they have been put in their new cells.

Foreign Minister Moratinos said in Luxembourg that in the coming days there will be more releases in Cuba. Probably. Maybe not. The list of the Castros is like a lottery. It depends on domestic issues, on the international situation or on the mood of the big bosses.

For Cubans who walk along La Rampa, the political prisoners are a distant issue and the releases are not news.

The government plays its cards close to its chest, skilfully keeping its movements hidden from the people. It does not want to alarm them. It prefers to keep people busy with football and two hours of queuing for an ice cream cone. Although there is neither strawberry nor chocolate.