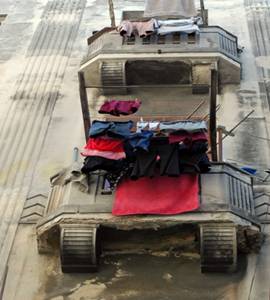 Much has been written about the deterioration of Havana and other cities throughout the width and breadth of the country, and I can assure you that nothing has been exaggerated. One need only to take a quick stroll through any Havana neighborhood such as such as Víbora, Santo Suárez, Casino Deportivo, Fontanar, Altahabana, Nuevo Vedado, to name but a few — neighborhoods which had previously been occupied largely by working, middle and upper class families, by professionals and by radio and TV personalities — to witness the rampant decay.

Early in the morning, in the entryways of every residence, one used to be able to see bottles of milk, bread hanging from grillwork or placed on a windowsill, and newspapers. It was just part of the everyday scene. It never occurred to anyone to violate the privacy of those homes by taking one of those items, even though they were so close-at-hand.

Property owners, pressured by the impact and scourge of the drastic changes which occurred in 1959, decided to leave the country and, thus, had to abandon their homes. These houses, often completely furnished, were “handed over” to the “new occupants,” who had no prior relationship to the properties and had sacrificed nothing in their construction.

As a result the social make-up of the neighborhoods began to change and with it their physical characteristics. Therefore, it should come as no surprise that in any given area one has to put up with music from audio systems turned to full volume, vulgar shouting and language from people screaming “at the top of their lungs,” trespassing through gardens as well as men and boys brazenly leaning against walls or entering buildings to urinate in full view, even in the bright light of day. Then there are the candy wrappers, empty packaging, soft drink cans and other refuse which, because of the absence of trash cans at curbs, are thrown carelessly into the middle public thoroughfares.

And that is not the worst of it. There are things more terrible that wound the sensibilities and provide extremely unpleasant spectacles that can be observed or overheard by anyone, even children. These include animal sacrifices performed in public or within view or earshot of neighbors and intended as an “offering to the deities” in the hopes of “helping to solve a problem.” One of these was recently carried out in the patio of a house here in the middle of Nuevo Vedado for a neighbor who is under investigation for the crime of embezzling public resources. There are also the tiresome “drumming sessions” that sometimes last till dawn.

I certainly agree that everyone should be allowed to profess his or her religion as he or she sees fit; that is a basic human right. But I do not agree that the practice of rituals and ceremonies should be allowed to disrupt the tranquility and order of a neighborhood. And I categorically disagree with the indiscriminate slaughter and torture of animals for these or any other reasons. When it comes to the sacrifice of animals for human consumption, day by day the civilized world looks for ever better methods that might reduce their suffering to a minimum.

I watch with sadness as day by day this beautiful city continues to lose the beauty for it was previously famous, as it is made ugly by uncontrolled architectural alterations and social behaviors that are unrelated to the traditions, unique architecture and good customs of the past — those things that allowed for harmonious co-existence.