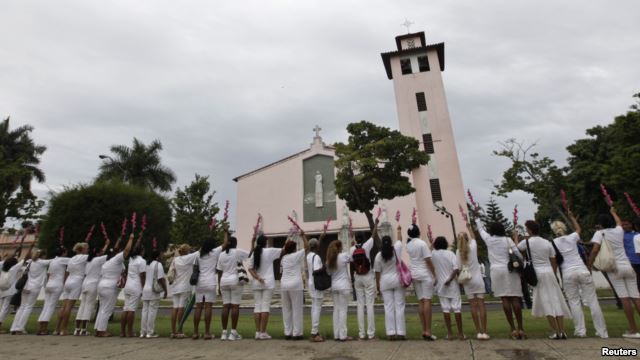 Just three days ago, I was at the Miami airport, I did not want to miss the arrival of Berta Soler to this city. Discrete and humble, there they were, sitting in a corner, a small group of those women who from their immensity, some time ago I named “My Brides in White”; then I remembered a Sunday morning, under that strong and indiscreet sun on 5th Avenue in Havana, and revealed before my eyes a perfect formation, which out of ignorance I thought was a convention of santeros.

A total misconception, they were women dressed in white with a flower in their hands. I stopped to watch, and a a fifty-something guy in a beige guayabera, his face distorted by shock and emotion, approached and slapped the hood of my car, and showing his G2 cars ordered me, with unusual kindness, “Get out of here, those are the Ladies in White.” I continued my slow march, determined to know who were those women.

Days later I learned that the same group of women were protesting near Revolution Square, just where I had staged a demonstration considering it to be the gathering place of all Cubans, and that one of them (Berta Soler), was planning not to leave there until she could see her husband, detained and sick. But of course, the police and paramilitary forces evicted them using the always repugnant help of kicks and shoves.

By then, I knew they weren’t just a curiosity, it was a duty, a feeling, I approached the women who demand the release of their families, their loved ones, every Sunday, who even today now manage to upset the complacency of Cuban dictators. Who dares to love so much?

The first time I saw, in the distance, a stout brunette with braids, and a blonde with a sunhat, who turned out to be the angel who, when everything was dark, God placed in my path and whose earthly name was Laura Pollán.

Suddenly a “Down with the Castro brothers” interrupted my memories, it was the deep and serious voice of an ebony become woman, of a lady who for her tenderness and simplicity it is impossible for some to believe that she is an open book. Her smile is a hook; and her courage rhymes with beauty, but not with fakery.

For a second I feared to approach her, I thought of time and its ravages and that she wouldn’t remember me; but no, I was wrong, despite her world travels, and I received many signs of affection from Berta, still a soldier of hope, armed with her helplessness. Practical, rational, obstinate, direct, strong, good-natured, happy, loyal, charismatic and sweet, she is an excellent friend, a perfect fusion of defects and virtues, an authentic Cuban. This simple woman of indomitable spirit; with no pretension to power, practicing love for those who find no mercy. She is a human being immune to this fever of stardom that both swarms and atrophies.

I hugged and kissed the same woman who one Sunday, dressed in white, after attending Mass at Santa Rita Church in Havana, and marching down 5th Avenue, I met sitting on one of the old benches still zealously guarded in Gandhi Park in Miramar, that beautiful Havana neighborhood that resists continuing to be anchored to the era of the thaw.