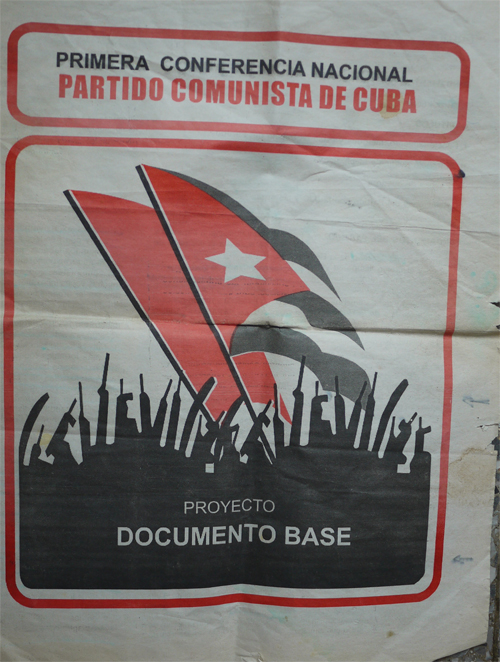 Official institutions should do what they promise they will. If this institution is the most official of all and the promises touch on essential matters, then the inescapable obligation is almost solemn.

With the members of its organization and with the people whom it governs by law, the Cuban Communist Party has at least two outstanding obligations, both of them contracted during the First National Conference, held on 28 January 2012.

One of these is already drafted, “the conceptualization of the fundamental theories of the Cuban economic model,” and the other is the renewal of the Party Central Committee by at least 20%.

This theoretical conceptualization would have to establish the nexus between the Marxist-Leninist doctrine, which charts the course of the socialist system, and the guidelines issued by the Sixth Congress.

It would have to explain that they are not using the rusty arms of capitalism to build socialism, but rather, although what they’re doing now looks like the rules of the market, in reality it is actually central planning and the profits foreign investors will earn, fruits of the labor of Cuban workers, will come not from goodwill, but something that will have to be named in some way.

With regards to the second outstanding debt, “refreshing” the Central Committee, many expect that this 20% renewal includes at least the retiring of the octogenarians and the acceptance of a different code for the new meritocracy, where the participants in the struggle against the prior dictatorship or those present in the heroic tasks for the first years would no longer appear.

Thus there would be Central Committee men and women who never fired at another human being, nor confiscated anyone’s property, nor even risked their own lives for the cause.

I wonder how many PCC militants have raised, among the Party’s core, their concern about this slowness in meeting such elevated commitments. I wonder how many Cubans remember those promises and how many see some kind of hope in their fulfillment.

Some might say I have a good memory. Actually my memory is bad. Very bad.